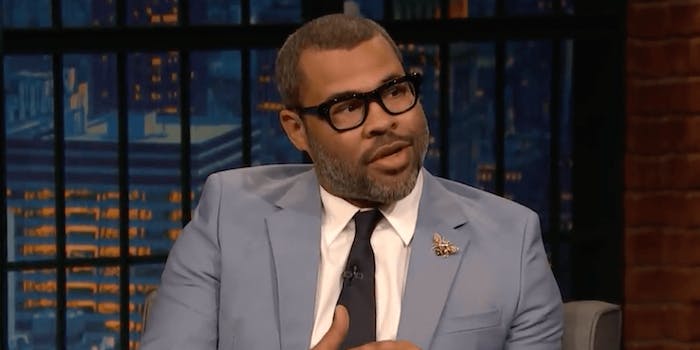 'Don't go into that mindset.'

Us director Jordan Peele says he’s not “comfortable” seeing photos of fans dressed as the Tethered for Halloween.

“Now, in Halloween season, I’ve started receiving a lot of people in Tethered costumes, which doesn’t make me comfortable,” Peele told Variety at the Governors Awards in Los Angeles on Sunday. “I like the fact that the movie is happening, it’s a phenomenon, it’s resonating, it’s iconic, but… they’re impersonating the stalkers and sending me stuff. I just feel like, don’t go into that mindset.”

Jordan Peele has a special request for people dressing up as #UsMovie characters for Halloween #HonoraryOscars pic.twitter.com/va1XKJsQhm

The horror film, which hit theaters in March to public and critical acclaim, involves a family on vacation, headed by Adelaide (Lupita Nyong’o) and Gabe (Winston Duke). The family’s doppelgängers, desiring a place in society, terrorize them and their friends, building up to an explosive and surprising ending.

Peele said Nyong’o, who accompanied the director, remained in character or at least “in mood” as Adelaide’s doppelgänger, Red, at all times on set. Peele called the performance “terrifying” and “magnificent to watch,” though he doesn’t seem too keen to revisit the character by way of his fans. “Don’t send me pictures of yourself dressed up as creepy characters,” he implored. “I’m good.”

Nyong’o also shared that the “11:11” motif haunts her. “I would receive text messages, screenshots of just ’11:11,’ and then I would just do it to [Peele],” she told Variety. “Four months went by, I hadn’t heard from Jordan, and then I just got… ’11:11′ in the middle of nowhere, and that’s always creepy, especially coming from him.”

The cast of ABC’s Black-ish paid homage to Us in its Halloween episode on Tuesday. Co-star Tracee Ellis Ross shared photos on Instagram of the Johnson family in blood-red jumpsuits from the film.

“Tethered. The Johnsons do it again,” she wrote in the caption. “Shout out to @blackishabc hair, makeup, and wardrobe for killing the Halloween game.”

Tethered. The Johnsons do it again. Shout out to @blackishabc hair, makeup, and wardrobe for killing the Halloween game. And there’s still more! This Tuesday 9:30pm/8:30c #blackish #halloween