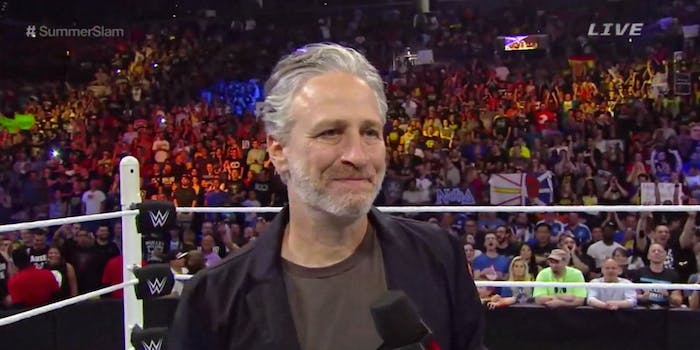 Your moment of zen comes with a smackdown today

Jon Stewart’s first post-Daily Show gig hosting WWE’s SummerSlam may have turned some heads, but he easily won over the crowd and even gave an old rival a helping hand.

When Stewart, sporting some obvious retirement scruff, took the stage at the Barclays Center in Brooklyn, New York, he was ready to lay down the smackdown. (And he might have thrown some shade at people’s growing wish for him to moderate a presidential debate along the way.)

Stewart, who spent much of the night trying to confront Brent Lesnar, wasn’t the only major WWE fan who got to play along at SummerSlam. Arrow’s Stephen Amell was ready to fight Stardust and King Barrett, but before his match, he saw Stewart’s usually strong resolve fly out the window as the Undertaker walked by while talking to Stewart and his son Nate.

Clearly, Nate is already developing his father’s sense of humor.

But the highlight of the night for non-wrestling-fans was the resolution of Stewart’s ongoing feud with wrestler Seth Rollins. What started out as a beef over who could host The Daily Show better turned personal as Stewart attacked Rollins on his own turf, literally: Stewart kicked Rollins in the balls. After some more back-and-forth, the two seemed to come to an understanding.

But when it came to Rollins’s championship match with John Cena, Stewart knew he couldn’t let Cena win and become the champion. So he did what he had to do: he went Jersey on Cena by running into the ring and smacking him down with a chair to help Rollins get the win.

Stewart and Rollins may no longer be enemies, but now the former late-night host has John Cena to worry about.