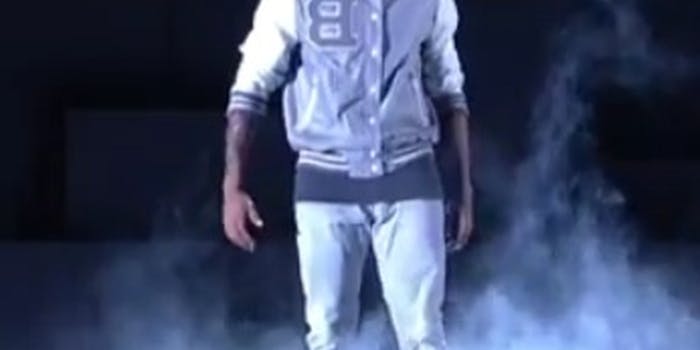 Jon Hendren gets no credit for Chris Brown-related tweets

If you take the time to curate tweets, should you expect credit?

Curators in the art world are usually given credit for their time, effort and work, but writers on social media? Only sometimes.

For Something Awful writer Jon Hendren, it didn’t happen. Hendren’s careful curation of the disturbing Chris Brown Grammy tweets everyone has been talking about these last couple of days went completely unattributed—and no one seems to care.

During the Grammys, some young women tweeted during his performance that they would love to be beaten by Chris Brown. (Brown is the same singer who savagely beat singer Rihanna right before the 2009 Grammy’s, an incident that was widely publicized and kept Brown from appearing at the award show for three years.)

Hendren curated these tweets on his Twitter stream on Sunday night to highlight their absurdity. “Everyone shut up about Chris Brown being a woman beater…Shiiiittt he can beat me up all night if he wants,” read one such tweet.

Almost all of the tweets have since been deleted by the original tweeter, and in some cases, the women even deleted their entire Twitter accounts.

If tweet-curator Hendren sounds familiar, it’s because he is the same writer who curated the tweets about spoiled teens being upset about their lack of cars or iPods as Christmas presents last December. Hendren’s Christmas curated work was featured by media outlets far and wide last year—with attribution. His work even spawned a song.

This time, Hendren’s name was no where to be found on his work, if it can be called that. Buzzfeed picked up the tweets and ran them under the title “25 Extremely Upsetting Reactions To Chris Brown At the Grammys.” From there, the tweets were mentioned by every outlet writing about the controversy, from the Huffington Post, to the Los Angeles Times, to CBS, where they were commented on by a domestic violence expert. Most news articles credited Buzzfeed with the curated tweets.

Hendren and his ilk has been described by Splitsider as the “kind of people that professional Internet-scrapers love and depend on,” so why was he not credited for his work this time?

When Hendren tweeted at the Buzzfeed writer about the matter, writer and senior editor Matt Stopera responded with:

“ohhhhh so you own the internet??”

To echo Stopera’s comments, it is true that Hendren does not have ownership rights to the tweets, nor does he own the Internet.

Washington Post reporter J. Freedom du Lac, however, was really upset over people plagiarising jokes on Twitter roughly a month ago, so clearly some type of protocol, or proper attribution method needs to created.

And if we are continuing the art world metaphor, curators are at times given more honors than the actual artists or content creators in a group show.

In Hendren’s case, it’s highly plausible no one would have even known about the tweets if he hadn’t curated them to begin with.

We reached out to Hendren for a comment via Twitter. His response was the epitome of “I don’t care,” a complete turn-around compared to his tweet to Buzzfeed:

“yes, my comment for your article is: ‘shoutout to@beebee880 i love you buddy’”