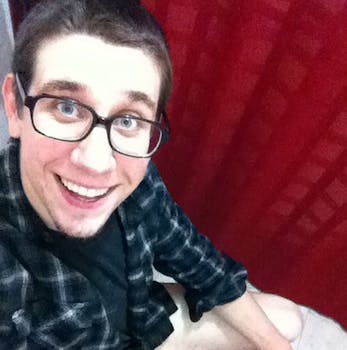 From his parents' basement in New England, voice actor Jon Del Sesto has charmed Reddit with his on-command character impersonations.

Jon Del Sesto can voice pretty much any character you can imagine on command, from iconic historical figures to absurd suggestions. Take for instance, this requested impression of a “kosher Nazi, unsure of his allegiance, self-loathing yet filled with nationalistic duty, drinking himself into a stupor at a bar just outside Auschwitz.”

The tricky part is getting someone to listen.

After an entire life spent making his friends and family laugh with voices like Gollum from The Lord of the Rings and six months of unemployment, the 23-year-old is trying to turn his talent into a career.

In attempt for exposure and recognition, Del Sesto challenged himself and the Reddit community last month: Give him a scenario or character and he will make an audio file to match it. He didn’t disappoint.

In one evening, he fulfilled more than 40 requests, turning suggestions like a “drag queen about to go back in time in a purple port a potty” and  “a racist person who doesn’t know he’s racist but says incredibly racist things” into crisp audio files, uploaded to Soundcloud.

“I thought most of the suggestions were amazing,” Del Sesto said in retrospect. “Reddit really is a collection of creative and inspired minds, sporadically blossoming brilliance at the most random of times. I really enjoyed recording the Skyrim voices, because I’ve been trapped in that game for weeks now with no sign of leaving.”

Del Sesto recorded the voices in parent’s New England basement—the same place he started making funny sounds back when he was a child.

In fourth grade, Del Sesto remembers his mother asking him to “do this impression of a chicken singing the theme to Star Wars.” By the time Del Sesto reached middle school, his voices evolved to include actual characters from Star Wars and TV commercials.

“I used to call my friend up on the phone, preventing my parents from calling anyone or using the Internet for hours, and we’d record these skits that we had created on my $5 headset through the receiver,” Del Sesto said. “One was about a phone psychic (like Miss Cleo), who cycled through every name possible before guessing the callers name.”

Following the Reddit challenge, Del Sesto was approached Sirius XM’s talk production manager about a potential gig in New York. The message lit a fire under Del Sestto and inspired him to create the following demo reel showing off his many voices:

“You need to experiment a lot, and you can’t be afraid to mess up,” Del Sesto told the Daily Dot. “Just like baking, it’s easy to follow the instructions—the real trick is adding in little intricacies afterwards, and really decorating your ‘vocal cake’.”

Del Sesto took personal inspiration from his former employer, System of a Down leader Serj Tankian, a master of many voices in his own right. For two years, while working in Los Angeles he helped create album artwork, directed music videos, created radio spots, managed contests, walked his dog, watched his house, and provided tech support. Probably his most rewarding role was as a videographer, following Tankian everywhere, filming his every move as part of the singer’s forthcoming documentary.

“I didn’t do any voice acting for Serj, but my last night in L.A. we were hanging out in his
studio, and around 2am, the super-silly-tired-disorder kicked in and I started
scatting in a Louis Armstrong type voice,” Del Sesto recalled. “That innocent joking around led to a track on his new jazz album—I still can’t wrap my mind around that.”

For now, Del Sesto is home in New England—spending time with his, girlfriend, lurking on Reddit, doing chicken impressions, and scouring the Internet for voice acting gigs.

“It’s an exciting time to have a dream, because if you have the motivation, it’s easier to obtain than ever before,” he said. “I live most of my days like I’m living in a cartoon, bouncing around from one character to the next, which is taxing on my parents and girlfriend I’m sure, but it keeps me in good spirits and more importantly it keeps those around me happy as well.”