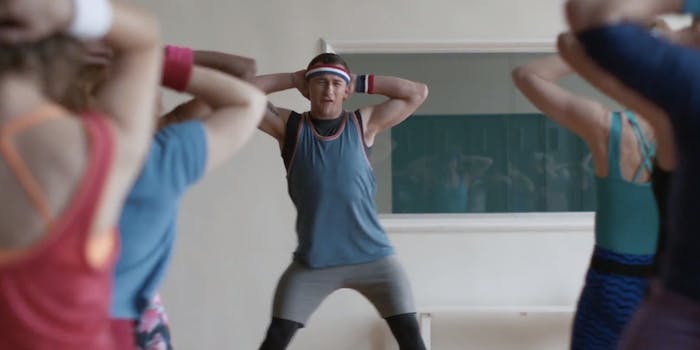 Johnny Manziel Snickers ad is almost as embarrassing as his preseason

If Johnny Manziel becomes the latest Cleveland Brown quarterback bust, he will need to look beyond television for a fallback career.

A week before the start of the 2014 season, Johnny Football appears in a Snickers commercial as Johnny JamBoogie, an ersatz fitness instructor who leads his class through a series of incoherent exercises. “Who’s got a pelvis?” the former Texas A&M star asks his female followers. Aside from an obscure inside joke, the spot is rather unremarkable and lacks the punch of Snickers Satisfies ads featuring Richard Lewis and the late Robin Williams. The expression “don’t quit your day job” certainly applies here.

In case you missed it, the teammate who comes to Manziel’s rescue in the commercial appeared the film The Waterboy. In the TV spot, his uniform name is Sandler, perhaps as a tribute to Adam Sandler, star of the 1998 comedy.

Manziel is not going into the 2014 season with a lot of promise. His performance in the preseason can generously be called lackluster, and he was fined $12,000 for flipping the bird at the Washington Redskins sideline during a recent exhibition game. The former Heisman Trophy winner will start the regular season on the bench behind starter Brian Hoyer. Fans remain optimistic that top draft pick will not reenact the brief, less-than-stellar career of the Browns’ 1999 No. 1 draft pick, quarterback Tim Couch. Couch is a leading character in every “where are they now” sports story.