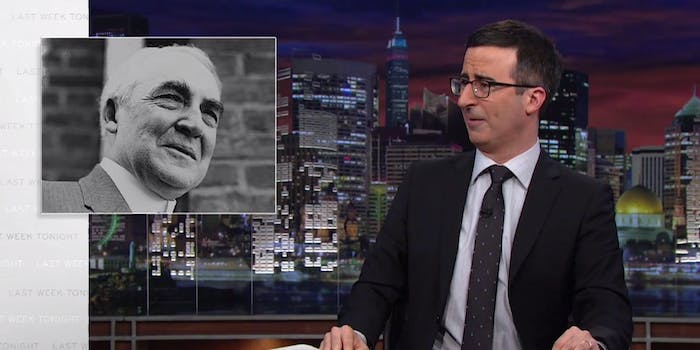 "As an R&B lyricist, he was way ahead of his time."

Warning: This article contains sexually explicit material that may be NSFW.

The legacy of one of the U.S.’s most forgettable presidents just got a lot more interesting

Warren G. Harding died two years into his first term, but the steamy love letters he wrote to his neighbor’s wife before he became president are still alive and well. The letters will be released to the public later this month, and John Oliver revealed that the “smutty f**k notes” were a lot more risqué for their time.

Saving his longform reporting for a story on the wealth gap, Oliver got straight to the juicy bits by reading parts of Harding’s letters to his mistress to the audience, revealing that the 29th president might have been a more interesting person than anyone could’ve imagined.

For somebody whose surname is 85 percent of the way to a “that’s what she said” joke, what Harding ultimately named his Lyndon B. Johnson is really a downright disappointment.