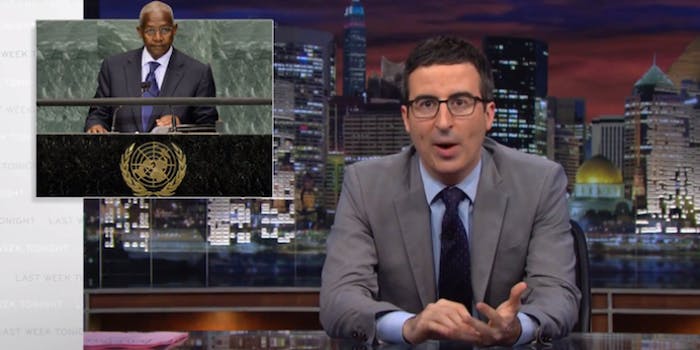 "Calling Uganda's laws harsh doesn’t really do them justice. That’s like calling Stalin a bit of a grump."

In a 17-minute segment, Oliver talks about America’s progress on the issue of marriage equality, then turns his focus to laws in other countries. Uganda just passed a bill that makes it illegal to simply be homosexual in the country, and criminalizes even “the ‘promotion’ of homosexuality,” according to Human Rights Watch.

“Calling Uganda’s laws harsh doesn’t really do them justice,” Oliver says. “That’s like calling Stalin a bit of a grump.”

He goes on to state that in 81 countries, same-sex behavior is criminalized, but that we in America should be happy we live in such a progressive, tolerant nation, right? Well, a group of American evangelicals traveled to Uganda and spoke out against homosexuality just before the passage of the law. He spotlights Scott Lively, author of The Pink Swastika, who claimed President Obama might also be a homosexual. Lively wants to take the rainbow symbolism away from the LGBTQ community, and put it back where it belongs: in God’s hands.

The segment explains just how Lively infiltrated Ugandan policy and government and became a spokesperson for homosexual persecution in the country, even as he denied his role back in the States. Oliver wagers American extremists saw the “market” for homophobia declining here and decided to export it, which is pretty terrifying.

Oliver also interviews transgender Ugandan activist Pepe Julian Onziema, who agrees Western influence was responsible for the incitement of hatred and explains how important gender identity is to the next generation.