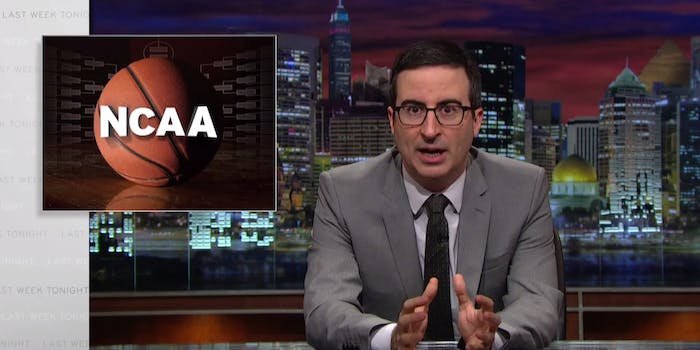 John Oliver slam-dunks this criticism of the NCAA

In March Madness, everyone wins—except the athletes.

February and April are nothing compared to the excitement and madness of March, if the NCAA has anything to do with it.

It’s John Oliver’s first March Madness on Last Week Tonight, and as he’s swept away by the games and the excessive amount of advertising, he notices the darker side of the games—and of college sports entirely.

“There is nothing inherently wrong with a sporting tournament making huge amounts of money, but there is something slightly troubling about a $1 billion sports enterprise where the athletes are not paid a penny,” Oliver said.

The athletes aren’t being paid, they’re being punished for petty offenses, and they’re being encouraged to take “paper classes” to boost their GPAs so they’re even eligible to play. Meanwhile, the NCAA and the coaches makes billions of dollars off of athletes who then don’t make a dime. And while the students can lose their scholarships and end up drowning in medical bills from a career-ending injury, the coaches earn millions while complaining about “student entitlement.”

To top it all off, Oliver has a video game to show everyone else how terrible it is to be a student athlete. Just restart and play in administrative mode—it’s a lot easier.