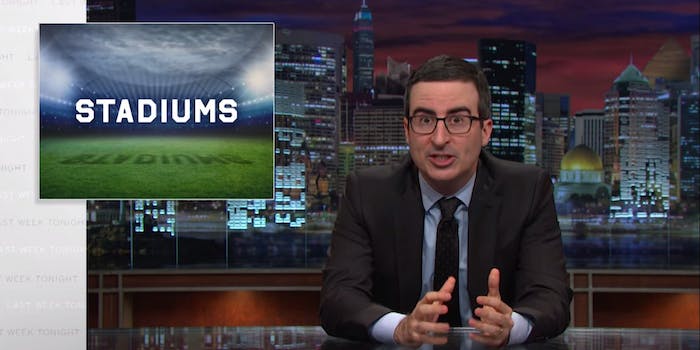 John Oliver is the best kind of sports fan. He’s clearly passionate, but he’s far from blind to the faults of the industry. His takedowns of FIFA corruption were especially effective coming from a genuine soccer fan, and now he’s directing his frustration at an issue that plagues every major sport: publicly funded stadiums.

Sports teams regularly demand that new stadiums be built using taxpayer money, even when the team itself is making billions of dollars. This, coupled with the fact that college teams don’t have to pay their players, is just one of the many problems caused by giving lucrative sports teams nonprofit status.

Honestly, it’s a real PR coup that some teams have successfully bullied their way into getting a new stadium by threatening to leave the city.

By drumming up local support from panicked fans, they manage to make this look like a grassroots campaign rather than what it actually is: holding a city hostage in exchange for a stadium upgrade.