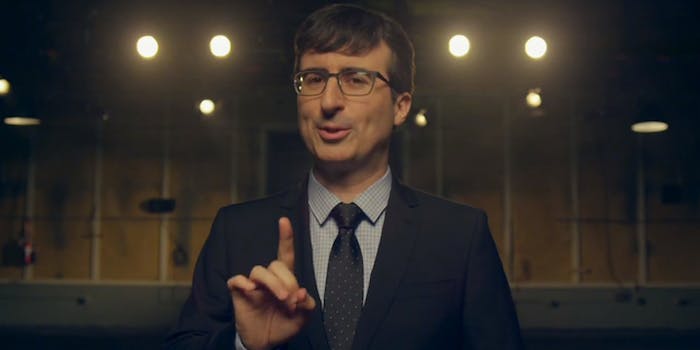 His debut was a bit uneven, but he tackled two stories that saved it.

For all the jokes about being late to the news, Oliver mostly tackled news stories you aren’t seeing elsewhere, like his extended interview with former NSA director Gen. Keith Alexander, and an explainer of the election that Western media is completely ignoring. He also put the entire state of Oregon on blast for their Obamacare fail.

With Stephen Colbert’s recent announcement that he’ll be taking over The Late Show in 2015, one must wonder if Oliver was asked to take over The Colbert Report ‘s slot. Would he have been a better fit there, within the fake real news business model that’s shaped Comedy Central’s late night shows? Oliver’s already proven himself a capable interviewer from his time on The Daily Show. When he filled in for Jon Stewart last summer, many fans of the show were sad to see him go. HBO likely picked up on that scent; possibly they snatched him away before Comedy Central could do anything about it.

Still, this sort of show might be exactly what HBO needs in its Sunday night lineup, which currently features Silicon Valley, Veep, and Game of Thrones, three fanbases that no doubt also watch The Daily Show and would stick around for Oliver. Last Week could also serve Oliver’s media-dissection technique well, as seen in the segment about India’s elections. Also, HBO lets him swear, and Oliver’s really good at that.

That still leaves the question of who will fill Colbert’s time slot; it could definitely benefit from a female comedian like Amy Schumer or Samantha Bee. Oliver’s debut was fairly uneven and attempted to tackle a bit too much, but it was saved by his needling of Gen. Alexander. Oliver’s able to shift deftly between cheeky standup delivery and passionate seriousness, but he was always at his best on The Daily Show when he got out from behind the desk and took an interviewee to task with an “Are you fucking serious?” Perhaps after a few more episodes, we’ll see if he’s serious.

You can watch the whole episode here.