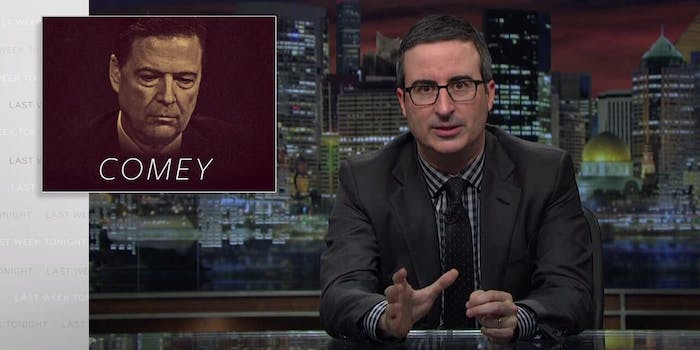 John Oliver on Trump firing Comey: ‘Can he really be this stupid?’

'Do you remember normal weeks? ‘Cause I don’t. I don’t remember what they felt like.'

On the latest episode of Last Week Tonight, John Oliver turned his attention to Donald Trump’s firing of James Comey and Trump’s concerning admissions behind why he got rid of his FBI director in the first place.

Despite the White House pointing to Deputy Attorney General Rod Rosenstein’s recommendation, Trump undermined it in an interview with NBC’s Lester Holt. Along with Trump’s claim that Comey told him he wasn’t under investigation, Trump admitted that Comey’s firing was in part because of the FBI’s investigation into the Trump campaign’s possible collusion with Russia.

“What are you doing?” Oliver replied to Trump. “‘I was thinking of the Russia investigation when I fired Comey’ is the one thing that you are not supposed to say out loud! It’s the kind of response that makes you ask three questions. One, can he really be this stupid?; two, does he really think we, as a country, are this stupid?; and three, are we, as a country, this stupid? And it’s entirely possible the answer to all three questions are ‘yes.’”

Oliver called bullshit on Trump’s version of events—pointing to what he called Comey’s more plausible version of the dinner that got out to the press—before demonstrating just how worse Trump made it after threatening Comey on Twitter. Nearly a week into the fallout from Comey’s firing, Oliver is just as exhausted as you are and he no longer remembers what normal weeks are like.

He ended his segment with an attempt to appeal to the 534 members of Congress who aren’t Ted Cruz to get them to do, well, anything about it. Congress could push for a special counsel to investigate or, if nothing else, admit that this isn’t normal.

“The Founding Fathers created a system of checks and balances to limit the power of the President, but it only works if someone fucking checks or balances, and if you don’t, it’s no longer on Trump,” Oliver said. “It’s on you.”

H/T the The Daily Beast