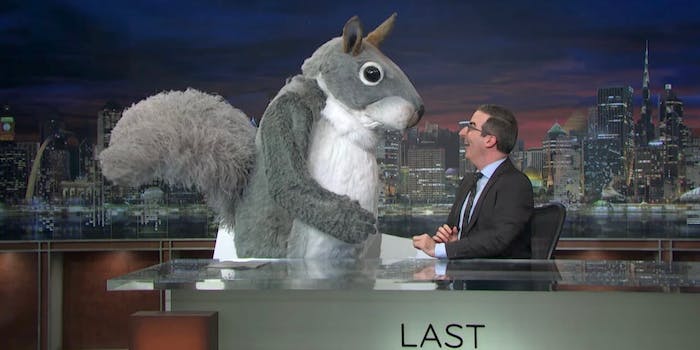 John Oliver takes on Trump and the coal industry

It wasn't just what Barack Obama did.

For more than three years, John Oliver has covered a wide range of topics—some of them on the more controversial side—on Last Week Tonight, but it wasn’t until his latest segment on coal that his show received a cease-and-desist letter before it even aired.

Oliver spent the majority of Sunday night’s episode discussing the many issues in the coal industry, something Donald Trump focused largely on throughout his presidential campaign. Yes, Oliver said, coal mining jobs are in decline, but those jobs have been disappearing for years. It’s not the only problem coal miners face. Oliver highlights the coal company CEOs who have cut benefits from miners while paying themselves more money. One such person, according to Oliver, is Murray Energy CEO Bob Murray, whose company sent Oliver a cease-and-desist letter ahead of the segment and pledged to sue him immediately if he went forward with it.

Not only did that not stop Oliver, he devoted around half of his segment to Murray, who he compared to a “geriatric Dr. Evil.” He looked at Murray’s alleged misdeeds, which included yelling at family members of coal miners who asked for information on their loved ones after a collapse, opposing safety measures, and allegations that a chat with a squirrel led to Murray found his company. (Murray has denied this.) For this last point, Oliver brought out a squirrel of his own, who further mocked Murray.

But Oliver is making a bigger point as he highlights some of the efforts to train and hire coal miners out of work in other industries. Trump has made promises to coal miners he can’t keep, and the longer he keeps pledging that those jobs will come back, the more he insults them.

“Trump needs to stop lying to coal miners, we all do,” Oliver said. “Stop telling them that their jobs are all coming back when they’re not, stop telling them that coal is clean when it isn’t, and stop pretending that this isn’t an industry in the middle of a difficult and painful—albeit necessary—transition. An honest conversation about coal and its miners needs to be had, and we should neither cease nor desist from having it.”