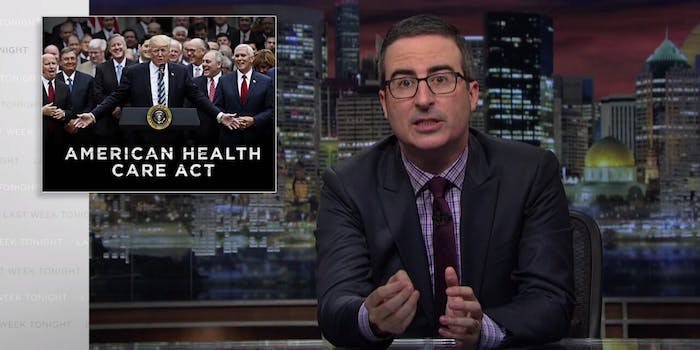 John Oliver laces into Republicans who voted for the AHCA

'I can explain that to you right now.'

The public outcry against House Republicans hasn’t died down since they narrowly passed the American Health Care Act on Thursday. And now John Oliver has plenty to say to the congressmen who voted for the bill without understanding its full implications.

Oliver already highlighted many of the bill’s flaws when its original iteration was released, and as he pointed out, the version that passed the House is even worse. Insurers would still have to cover people with pre-existing conditions, but under the AHCA, they could now charge them more for coverage. However, some members who voted for it seemed to be unaware of just what it would do to their own constituents, including Rep. Chris Collins (R-N.Y.)

“I can explain that to you right now,” Oliver said to Collins. “This bill could cause many of your constituents to get thrown into an individual marketplace they cannot afford and when they realize that, they are going to be furious with you. Essentially you fucked up.”

He then demonstrated just how much Collins fucked up with multiple charts. In short, a lot.

Although the version of the AHCA that passed the House will probably go nowhere in the Senate, Oliver stressed the importance of not becoming complacent. The Senate bill might not be as harsh as the House’s, but it could still be detrimental to millions of Americans. As he reminds his audience, Trump will sign any bill—even if it arrives on a snake—regarding healthcare, as long as it says “Obamacare is repealed.”