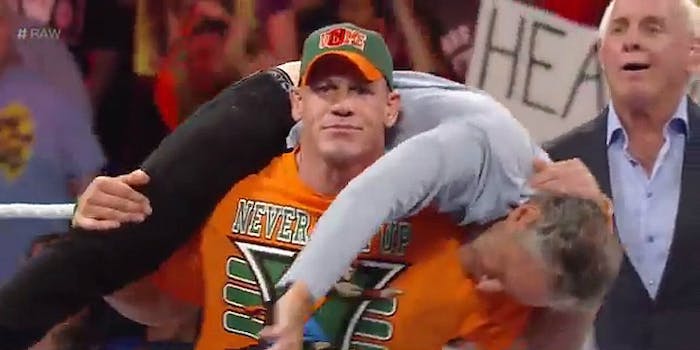 As Stewart tried to offer his hand to Cena during at attempt at some kind of truce, Cena—long the babyface for the WWE—got nasty, grabbing Stewart and giving him a ride on his finishing move, appropriately titled the Attitude Adjustment.

It’s hard not sympathize with Cena. After all, this was how Stewart turned on Cena during Sunday’s big show.

As for Stewart, he seemed to take the bump well, and he obviously felt OK enough to try to pull down his shirt over his exposed belly.

And with that, Cena left the ring, apparently getting the approval of Ric Flair, who obviously believes that one good turn deserves another (or that one good chair shot deserves a high-impact wrestling bump).