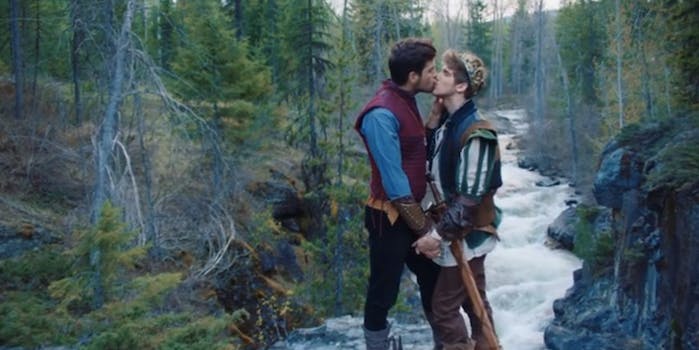 A creative take on a critical moment in recent vlogging history.

YouTuber Joey Graceffa’s new music video is a fairytale where the prince not only gets vengeance, he also gets his own prince.

In the video for his single “Don’t Wait,” Graceffa tells the story of a young prince who grows up to battle his own evil twin and save the boy who saved him from bullying, with a lip-lock signaling their happy ending.

Graceffa follows up the music video with a tweet and a blog explicitly explaining that he’s gay and open about it now, after eight years on the platform. He describes it as being open “for one of the first times ever on [his] YouTube channel.”

After 8 years of this topic being the most discussed thing on my YouTube channel. To FINALLY be open felt incredible.

With the clip Graceffa joins the long line of YouTubers who’ve used their medium to affirm their sexuality to their massive audience. Last year Connor Franta made waves with a coming out video. Graceffa’s fanbase of 4.6 million fans extends beyond YouTube, with two stints on CBS’s The Amazing Race.