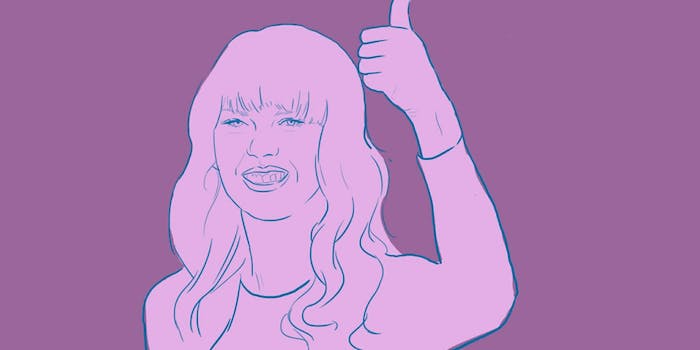 'It's like I got this music in my mind, saying it's gonna be all right.'

These days, everyone thinks they can one-up Taylor Swift. Maybe it’s because the pop diva makes it look so easy. She’s conquered the country charts, enlisted the talents of legendary hit-maker Max Martin to conquer the pop charts, and ultimately got the satisfaction of Kanye West finally letting her finish, all by the tender age of 25.

Swift’s ascendance has come with numerous cover songs. Most famously, Ryan Adams recently released a full-length cover album of her pop smash 1989, self-consciously done in the style of seminal indie darlings the Smiths. Smirking avant-folkie Father John Misty then covered Adams’ cover of Swift’s “Blank Space” in the style of the Velvet Underground, in a meta-commentary that you probably shouldn’t think too hard about.

They aren’t alone: There’s a litany of other musicians covering Swift’s work. However, the most striking cover hit YouTube earlier this week.

Performing live at the Dallas Arboretum and Botanical Gardens on Friday, musician Joel Cross give his own soulful take on Swift’s “Shake It Off.”

Unlike Adams, who can’t seem to bring himself to holler the song’s earworm of a chorus and instead buries it under a hazy whisper, Cross lets the song’s melody shine with a vocal treatment worthy of Bill Withers and playfully intricate guitar work.

Is this the best T-Swift cover yet?