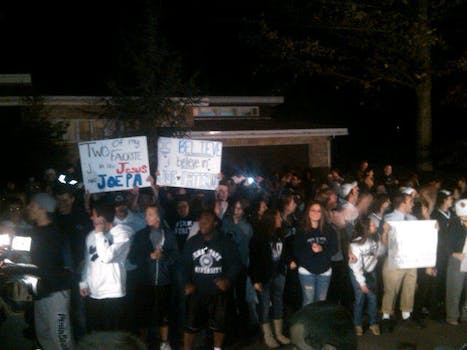 Joe Paterno, 84-year-old head coach of the Penn State Nittany Lions and recently-crowned winningest coach in D-I football history, has already been convicted by the court of popular opinion for not taking a harder stand against his former defensive coordinator Jerry Sandusky, who allegedly molested scores of young boys.

Deepening the scandal, Penn State’s senior vice president and athletic director both departed suddenly on Monday. It seemed that when Paterno’s weekly press conference was abruptly cancelled Tuesday morning, the university had gone into damage control, and it would be impossible to hear from the head coach, especially amid allegations he would soon be fired. (UPDATE: Paterno announced this morning that he will retire at the end of the season.)

However, several hundred fans and supporters gathered on Paterno’s lawn to show support for the coach Tuesday night. Paterno came outside to address the crowd and, since plenty of those who gathered use Twitter, inadvertantly gave a de facto press conference.

After Paterno went inside, the students marched around campus. Some wanted to a guard a statue of Paterno, which was rumored to be the target of vandals. Some called the marching a riot. The following are tweets from users who purport to have been there.