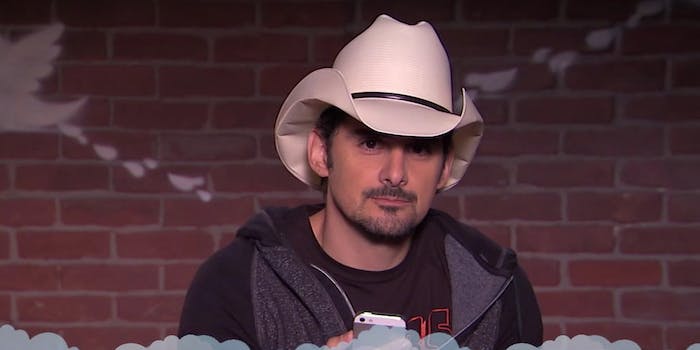 They could probably write a song about this.

The Country Music Awards might be over, but that doesn’t mean the musicians are immune to being taken down a few notches by their fans.

Some of country’s biggest stars showed up for a post-CMAs edition of Mean Tweets, and it’s full of garbage and insightful thoughts, just like you’ve come to expect from this segment. Twitter users attack everything from the sound of their music to their faces to how they look and sound onstage. Some of the musicians give the camera dirty looks, but others can hardly keep it together while reading the criticism.

In some cases, the performers even admit that Twitter has a point. Brett Eldredge sees how someone could believe that he would get arrested for doing someone dumb at Walmart, while Willie Nelson doesn’t even seem mad about the tweets aimed at him.