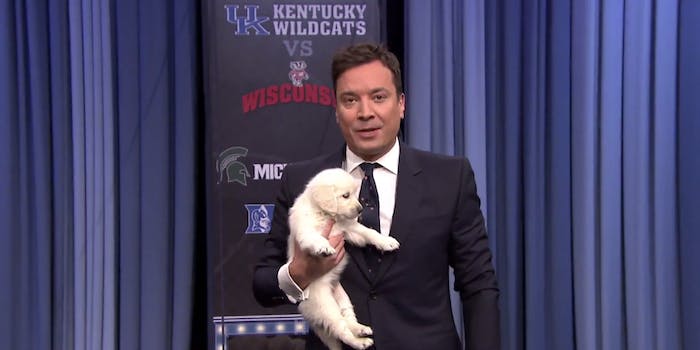 Jimmy Fallon got puppies to predict who will win March Madness

It's so impossible to have a perfect bracket you might as well get a puppy to pick it for you.

Filling out your March Madness bracket takes some knowledge of college basketball, but let’s be honest, it also takes a great deal of luck.

As we’ve seen many times in the past few weeks, anything can happen on the court. By the time we get to the Final Four, only the sports gurus and the people who will openly admit not knowing what they’re doing still have good brackets. You might as well have small children or animals pick the outcome.

And that’s what Jimmy Fallon did on The Tonight Show. To test his puppy predictors, Fallon set out four bowls of kibble marked with Kentucky, Wisconsin, Michigan State. The team with the bowl that received the most canine attention, he reasoned, would be the winner.

If the puppies do get it right, all of college basketball might collectively lose it.