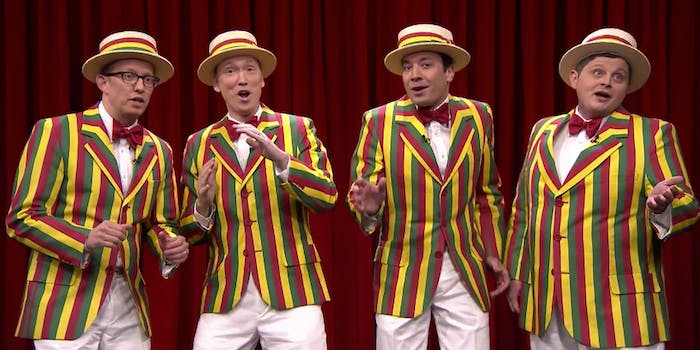 Jimmy Fallon’s ‘Ignition (Remix)’ is fresh out of the barbershop

You could never imagine Jay Leno doing something like this.

Anyone worried that Jimmy Fallon would abandon his trademark variety sketches upon starting his Tonight Show gig can set their fears aside.

He and Will Smith performed the latest “Evolution of Dancing” on his inaugural show, and last night he brought another gem out of the Late Night goody bag.

The Ragtime Gals, Fallon’s barbershop quartet (complete with the striped suits and hats), has settled in quite nicely in the new studio and still had time to harmonize yet another innuendo-laden song so it’s fit for the whole family.

R. Kelly’s “Ignition (Remix)” is completely transformed into an almost recognizable and even catchier tune, and somehow the “toot toot”s blended in even better than the original.

You could never imagine Jay Leno doing something like this.