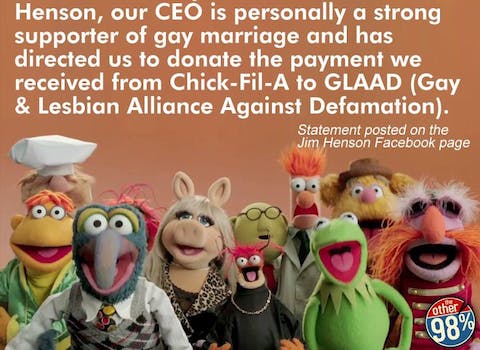 The Jim Henson company takes a stand for diversity.

Thousands of people have pledged to boycott Chick-fil-A after its president admitted he was “guilty as charged” of accusations that the company stood against gay marriage.

Now the Muppets have cut ties with the fast food joint, too.

In a terse statement, the Jim Henson Company announced via its Facebook page that it would no longer accept Chick-fil-A as a sponsor:

“The Jim Henson Company has celebrated and embraced diversity and inclusiveness for over fifty years and we have notified Chick-Fil-A that we do not wish to partner with them on any future endeavors.  Lisa Henson, our CEO is personally a strong supporter of gay marriage and has directed us to donate the payment we received from Chick-Fil-A to GLAAD.”

That statement has been shared more than 5,000 times since it was posted on Friday. Significantly more popular, however, is a photoshopped version, posted by the Facebook group The Other 98%, of the Muppets standing under the statement in solidarity. It’s been shared almost 40,000 times since Monday afternoon.

Roy L Bonario decided to quote the Bible’s book of Leviticus, saying “You shall not commit sexual acts with a male, in place of sexual intercourse with a female, for this is an abomination.”

Another user, however, Victor Ribeiro, noted that Bonario’s pictures were available for anyone with a Facebook account to see, so he posted one of Bonario wearing a shirt that seemed to violate another one of Leviticus’s laws.

“Roy, I see you’re wearing mixed fibers in this picture,” Bonario wrote. “Can we stone you now?”