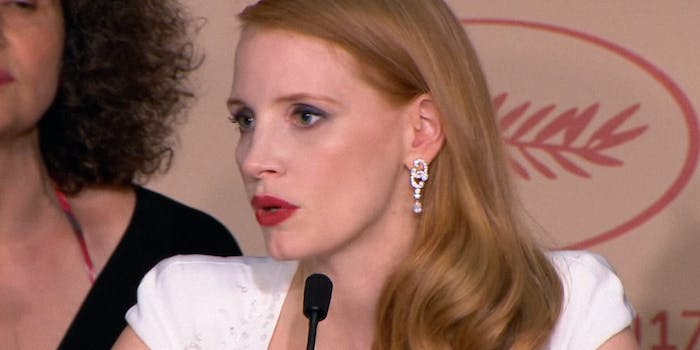 She calls the treatment of female characters at Cannes 'disturbing.'

The Cannes Film Festival handed out several awards to female filmmakers this year, but Jessica Chastain was more concerned with the overall lack of women involved in the storytelling process in the films that were shown.

As a member of the Jury at Cannes Film Festival, Chastain opened up at the closing press conference about her deep disappointment.

“This is the first time I’ve watched 20 films in 10 days and I love movies,” she said. “And the one thing I really took away from this experience is how the world views women from the female characters that I saw represented. It was quite disturbing to me, to be honest—with, there are some exceptions, I will say.”

Chastain’s comments come as Cannes awarded Best Director to Sofia Coppola for The Beguiled—only the second female director to ever win—and Lynne Ramsay nabbed a historic win for screenwriting for You Were Never Here. Meanwhile, the film festival has only ever awarded its top prize, the Palme d’Or, to one woman, Jane Campion in 1993 for The Piano; Campion called the 24-year gap with no female filmmakers winning the Palme d’Or “insane.”

All of this clearly resonated, as many, including director Ava DuVernay, shared the clip across social media.

Chastain has long called for more representation both behind the camera and among film critics. Though she criticized the representation of female characters onscreen, she does hope this could change if the industry would allow more female filmmakers to tell their stories.

“I do hope when we include female storytellers we will be more of the women I recognize in my day-to-day life,” Chastain said. “Ones that are proactive, have their own agencies. Don’t just react to the men around them. They have their own point of view.”