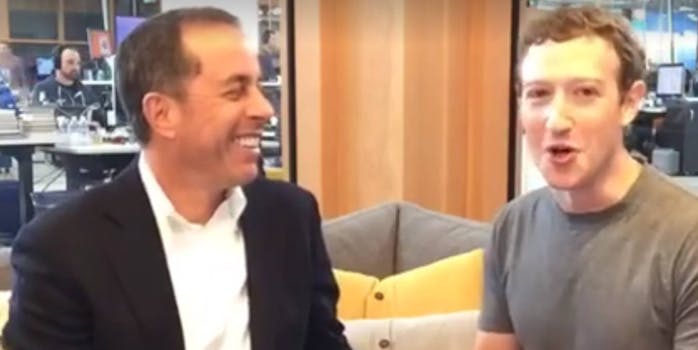 Jerry Seinfeld gets personal with Mark Zuckerberg on Facebook Live

Jerry Seinfeld took over Mark Zuckerberg’s first ever Facebook Live Q&A session Tuesday afternoon with a few questions of his own.

“Do you take a shower or work out first in the morning?” Seinfeld asked Zuckerberg.

The actor was visiting Facebook’s headquarters to show the company’s employees the first episode of his new season of Comedians in Cars. He also got the chance to test out the social network’s new virtual reality tool, Oculus.

Zuckerberg interrupted his live session to invite Seinfeld to join in on the fun. After the comedian dodged his first question, he turned the tables on Zuckerberg asking him what time he wakes up every morning.

The Facebook founder said having a baby has made him a morning person, and he now wakes up at 6am. Like the rest of us, Zuckerberg said he checks his phone first thing in the morning, claiming that “it won’t be more than a few minutes.”

“I like to have three eggs because I read about this lady in Italy that’s 105 and has three eggs for breakfast every morning…,” he said. “It’s a fantastic breakfast. It holds you, like, for 4 hours.”

Zuckerberg had originally been hosting physical town-hall style Q&A’s around the world and recently had the idea to host one on the new Facebook Live feature.

“Rather than just having a few hundred people in a room, we can do this here and have tens or hundreds of thousands of people participating in a town hall Q&A from all across the world,” he said.