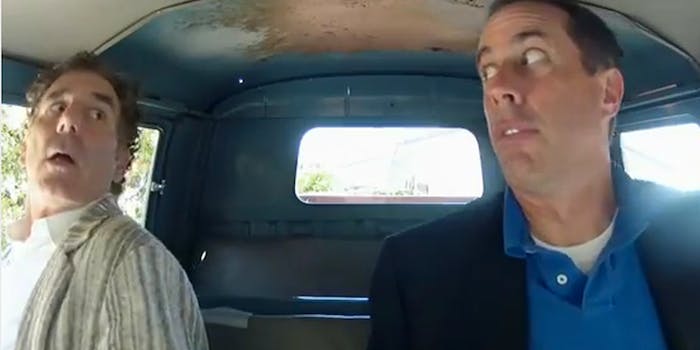 Jerry Seinfeld feels bad that he created The Marriage Ref and will do anything for you to like him again. How else could you explain why he’s starring in a Web series?

It’s called Comedians in Cars Getting Coffee, and from the short promo clip, it could be funny. The premise of the show, which premieres July 19, is simple: Seinfeld rides in a car with another well-known comedian in the passenger seat to get coffee.

In other words, it’s like Seinfeld but limited to one location.

A commenter said the series is just an “excuse for [Seinfeld] to show off his cars” while another person, who obviously hasn’t watched the fantastic show Veep yet, pleaded to bring Seinfeld back.

The Web series is backed by Crackle, a Sony-owned video distribution network. The network’s YouTube channel consists a mix of trailers and movies.

Who knows what types of things they will all be talking about, but we would love to see Seinfeld take Baldwin to certain Starbucks in Manhattan.