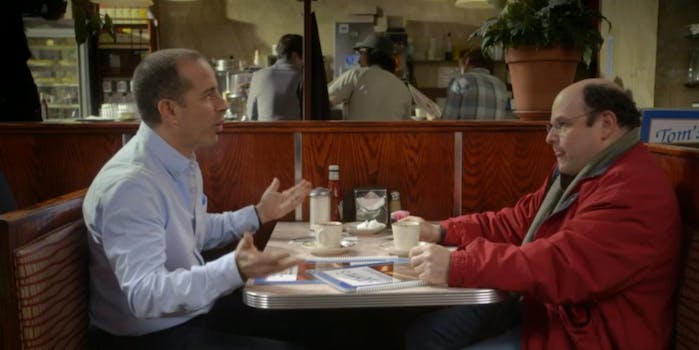 Not that we're complaining.

Curt Menefee hailed the two as average New Yorkers, but there was nothing average about them. Jerry Seinfeld and Jason Alexander were together again, cruising New York and drinking coffee in the most public ad campaign for the former’s webseries Comedians In Cars Getting Coffee yet.

The 1:30 clip, aired last night during the Super Bowl at the onset of half time, found Seinfeld and Alexander’s George Costanza character together again for the first time since 1998, arguing about an invitation to a watch party in a booth at Tom’s Restaurant, the Manhattan inspiration for Monk’s Café, the fictional coffee shop often frequented by the four main characters of Seinfeld’s show.

It was happening because of Seinfeld’s new webseries—made clear by the direct promo at the end—but it was still a nice sight to see: Jerry and George again, in the coffee shop talking about some arcane business.

“You availed yourself of the toilet in their master bedroom,” Jerry said.

It sent Twitter legend @Seinfeld2000 into an absolute tailspin.

WHAT IF SINEFELD ON TV RITE NOW

Im speechless I have no speech

In reality, the segment could have used a laugh track. In a show about nothing, a selected conversation looks forced, especially after a 16 year hiatus. Nevertheless, watching George and Jerry go at it was like watching your two uncles argue over the remote one more time: This is the way it once always was.

You can watch a bit more of George and Jerry’s reunion here.

Photo via Comedians in Cars Getting Coffee/Crackle