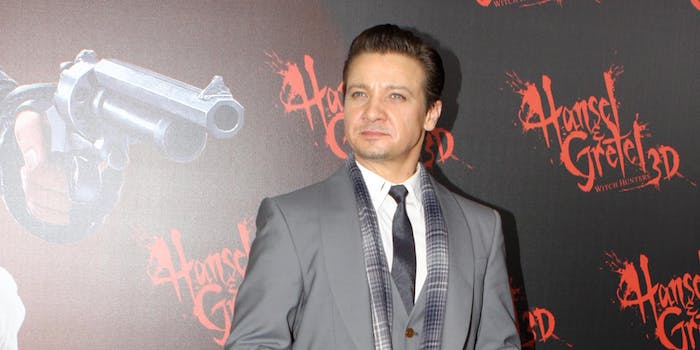 Unlike Bradley Cooper, Jeremy Renner has no interest in supporting his female co-stars in negotiating better pay.

Renner shared this opinion in response to Jennifer Lawrence‘s essay titled “Why do I make less than my male co-stars?” which prompted Bradley Cooper to say he would negotiate alongside his female co-stars in the future. By sharing salary negotiation details before any deals are signed, Cooper hopes to level the playing field for actresses who would otherwise receive a smaller paycheck.

Cooper and Renner were both paid more than Jennifer Lawrence for their work in American Hustle, but while Cooper supports Lawrence’s attempt to combat sexism in Hollywood, Renner isn’t so sure.

“That’s not my job,” he told Business Insider. “I don’t know contracts and money and all that sort of stuff.”

Renner added that he prefers to focus on his job as a performer, and that while he agrees that women should receive equal pay, “when it comes to that sort of stuff I let other people deal with that.”

As Business Insider pointed out, it’s typical for actors to let their agents and lawyers take care of contract negotiations. But it’s hard to see how actresses will be able to close the wage gap if they don’t have access to information about how much their male co-stars are being paid. Bradley Cooper’s expression of solidarity is a simple way to help women negotiate better salaries for themselves, while Renner’s “not my job” attitude is part of the reason why the wage gap is such an entrenched problem in the first place.

Renner’s dismissal of the need to help women close the wage gap, combined with his sexist jokes during the Avengers: Age of Ultron press tour, begins to paint an unpleasant picture about his attitude toward women. Dismissing Hollywood’s wage gap as someone else’s problem is hardly a good way to recover from that kind of bad publicity.