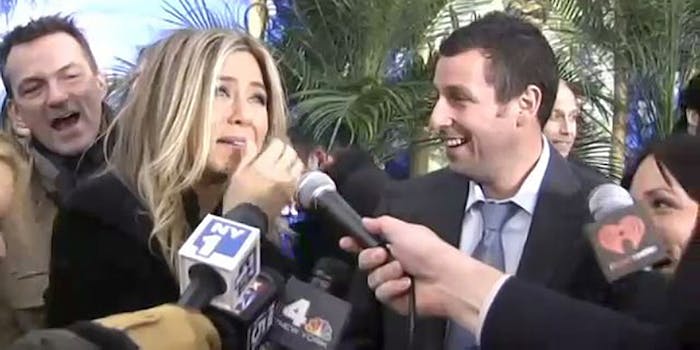 Jennifer Aniston and Adam Sandler freaked out by giant reporter

Brad Blanks said he'd just get in the way if he stood up. He's … not wrong.

As successful actors at the top of their field, it’s safe to assume that Jennifer Aniston and Adam Sandler are used to looking down on people. So when someone quite literally looks down on them, they aren’t quite sure how to react.

Celebrity reporter Brad Blanks was attending the New York City premiere of the actors’ movie Just Go With It. When they asked why he was on his knees to interview them, he explained that he was “such a big guy” and that he gets in the way.

Aniston is visibly petrified, while a startled Sandler quickly regains his composure and begins playfully yelling at Banks.

This should come as no surprise, as Sandler is already well-accustomed to dealing with larger-than-life people.