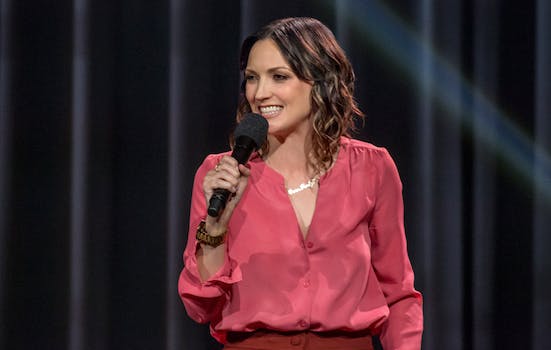 The title of Jen Kirkman’s latest Netflix special is a nod to Matthew McConaughey’s inspirational catchphrase, and it’s not a joke.

“I’m sincerely into him,” she says. “Like, not sexually. As a role model.”

In the hourlong Just Keep Livin’? Kirkman holds court on menstruation, meditation, and street harassment, among other topics. Her comedy isn’t based on the setup-punchline format; she’s more of a monologist. The genesis of her McConaughey-inspired “JKL” tattoo unfurls through a story about a concentration camp, and part of the thrill is watching Kirkman build a bridge between anecdotes.

“I was trying to poke fun at myself for reading a magazine and getting a tattoo about it,” she sums up.

Her debut special, 2015’s I’m Gonna Die Alone (And I Feel Fine), explored life at 40 and the expectations women face, and she explains that was more of an introduction to people who might not have known she’s been doing standup for nearly two decades. While I’m Gonna Die Alone was an amalgamation of six years of jokes, JKL? is pulled from the last year.

And 2016 was an interesting year for Kirkman. She published another memoir, I Know What I’m Doing and Other Lies I Tell Myself, in April. That same month, Kirkman started retweeting stories of street harassment, highlighting its prevalence across generations. Late in the special, she devotes a good chunk of time to why men still don’t understand that it’s not appropriate to yell at women on the street and contrasts that with a story about walking in North Carolina and being approached by a man in a truck who, it turns out, just wanted to compliment her boots.

“I was in the middle of a man’s existential crisis about noticing a woman’s shoe,” she says. “I really thought that was funny. That joke I wanted to be not on him, but on the concept of, ‘Well, that actually made me feel better.’”

Elsewhere in the special, she talks about traveling alone in Europe (Warning: There is a bad Italian accent involved) and relates that her dad worriedly asked if she’s afraid of ISIS. Her reply: “I’m just busy being afraid of plain ol’ men.”

Last August, a Hillary Clinton tweet brought the rage of Twitter down on Kirkman, and she briefly left the platform after seeing a wave of harassment, which she alludes might have been something more “structured.” She’s hesitant to talk about the incident, but last year saw comedians like Leslie Jones harassed off Twitter by racist, sexist entities, and, as comedian Iliza Shlesinger recently pointed out, women’s appearances are still casually picked apart. In the special Kirkman makes sure to point out the ridiculousness of how we still treat women who do comedy: “‘Women’ is not a type of comedy; ‘women’ is a type of person.”

After the release of her latest special, Kirkman says she has to “completely reinvent” herself and figure out how to fill a blank slate. “And I’ve got nothing on my mind, so it’s kind of thrilling. …But ask me in six months and I’ll be like, ‘This is horrible.’”