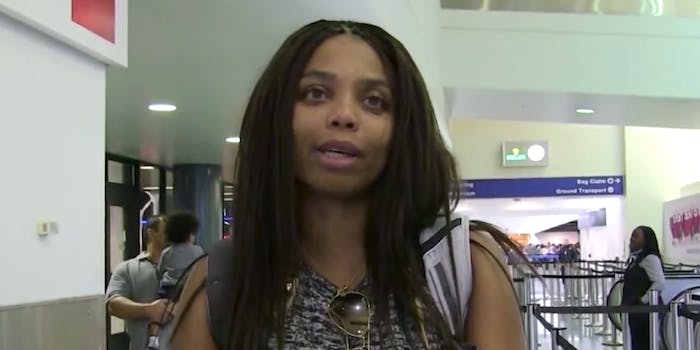 If you're waiting for Jemele Hill to apologize, don't hold your breath.

Days before returning to work after her ESPN suspension, anchor Jemele Hill said she deserved to be suspended for violating the company’s social media policies but won’t apologize for calling President Donald Trump a white supremacist or for encouraging the boycott of NFL advertisers.

Speaking to a TMZ videographer, Hill said she regretted putting ESPN in an unflattering position but that she stood by her thoughts. The network suspended the anchor for two weeks after she violated the company’s social media policy, encouraging people who disagreed with Dallas Cowboys owner Jerry Jones to boycott the team’s advertisers. Jones had threatened to bench players who kneel for the national anthem.

“This play always work. Change happens when advertisers are impacted. If you feel strongly about JJ’s statement, boycott his advertisers,” Hill tweeted on Oct. 8. “If you strongly reject what Jerry Jones said, the key is his advertisers. Don’t place the burden squarely on the players.”

The following day, Hill elaborated on her suggestions, tweeting that she wasn’t advocating boycotting the NFL as a whole but that “an unfair burden has been put on players in Dallas [and] Miami [with] anthem directives.”

In the TMZ video, Hill told her supporters she was thankful and humbled by their solidarity and said she won’t be leaving ESPN over the suspension. While she refrained from commenting on her perception of the fairness of ESPN’s actions (“It doesn’t really matter what I think,” Hill concluded), she said ESPN acted against her how it saw fit. ESPN had previously refrained from disciplining Hill after she tweeted in September that Trump is a white supremacist.

“I would tell people, absolutely, after my Donald Trump tweets, I deserved that suspension. I deserved it. Like I violated the policy, I deserve that suspension,” Hill said. “I put ESPN in a bad spot [but] I’ll never take back what I said.”

Hill will be back on ESPN on Monday—her Twitter presence and all.

“I’m coming back to Twitter. I want people to understand this, there was never any restrictions placed on me about Twitter, so … I’ll be back on Twitter, I’ll be my usual self,” Hill said.

Watch the full TMZ video below: