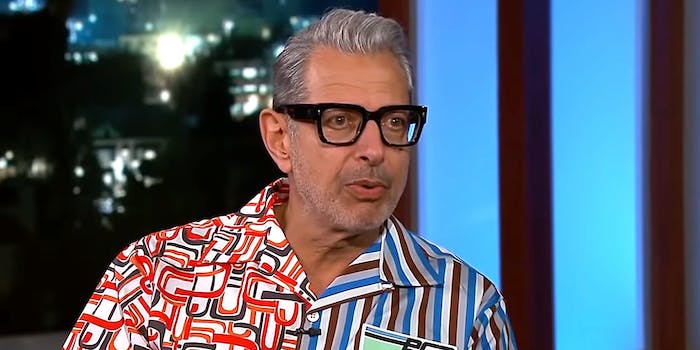 One ugly shirt, one tough choice.

Many horrors have presented themselves this week, but there is one event that might offer some comfort, some focus. And it is looking at Pusha T and Jeff Goldblum wearing the same weird shirt.

Twitter user Bri Malandro presented the synchronicity as a who-wore-it-best situation, but people had more questions if they were going to give an informed answer. What do Goldblum’s shoes look like? Is Pusha’s undershirt necessary?

who wore it best? RT for jeff goldblum fav for pusha t pic.twitter.com/qmQnhg1qFX

Goldblum wore the Fieri-esque shirt, which is from Prada’s fall 2018 menswear collection, on Jimmy Kimmel Live on Tuesday night, and the fact that he also talked about his jazz band was just the cherry on top. Pusha T wore the shirt when he performed at the Governors Ball Music Festival earlier this month. Goldblum seemed to be winning the poll, but people had very specific reasons for their vote.