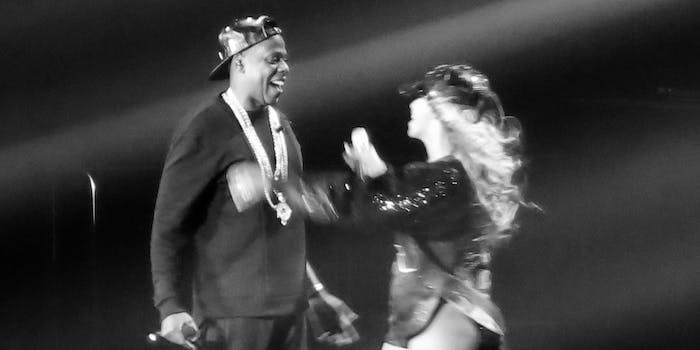 The 30-second clip proves the two might be drunk in love after all.

Ever since the Met Gala elevator debacle in May, the world’s most formidable power couple, Beyoncé and Jay-Z, have been ensconced in constant rumors of divorce. Up until last month’s MTV’s Video Music Awards, reports were all but declaring that Blue Ivy Carter would soon be in the middle of a Kramer vs. Kramer–style split.

Yet it was Beyoncé’s 16-minute powerhouse performance during the VMAs, capped off with an award presentation by her beloved, that began to stamp out the fires of marital discontent. The couple was seen sharing a loving kiss backstage when the cameras were off and the world took a brief sigh of a relief knowing that the two might be drunk in love after all.

However, it’s the video tribute Jay-Z released in honor of his wife’s 33rd birthday on Thursday that most thoroughly doused rumors of divorcé. The 30-second clip contains backstage footage from the couple’s On the Run tour, showcasing the effervescent and flawless Bey we all know and love.

Now the world can rest easy and you can enjoy your weekend knowing that Blue has parents who love each other very much.