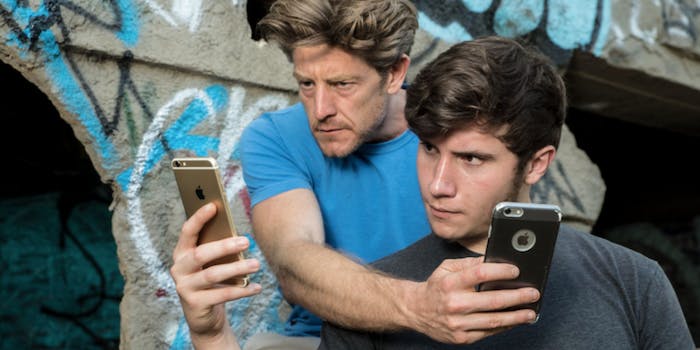 Vine heads to the big screen in ‘FML’

'FML' packs in more Vine celebs than you can shake a loop at.

Jason Nash is the “old guy” on Vine, and he’s just fine with that, thanks. Now, he’s parlaying his success on the platform into a movie.

Nash, who has more than 1 million followers on Vine, just launched a Kickstarter for FML: A Social Media Adventure, which is set to feature him and fellow Vine personality Brandon Calvillo, as well as Nicholas Megalis, Patton Oswalt, Silicon Valley’s T.J. Miller, and Cougar Town’s Busy Phillips, among many others. Nash and Calvillo (who has more than 4 million followers) star as friends separated by two decades in age, who decide to take a road trip and amplify their respective social media followings. While it’s not a documentary, their friendship did start on Vine, when Nash was trying to promote another movie, 2014’s Jason Nash Is Married.

“He was the comedy partner I’d been waiting to meet my whole life,” Nash says of Calvillo. “But he was 20 and I’m 40, and so I would drive down there and do vines with him and drive back to my family. And we just had this really good relationship; he was a kid who worked at Gamestop and lived with his mom and was really trying to figure out life. I have a wife and some kids and was in the middle of a mid-life crisis. So I thought, ‘This would be a good area for a movie.’ Two generations meeting on social media.”

Nash says the movie’s foundation is their friendship, but FML is also about the power of social media to bring people together, as well as our collective thirst for instant feedback and “likes.”

“It’s a satire,” Nash explained. “It’s about all of us. If someone posts something on Facebook and it gets two likes, they get all down. It’s all about how the phone is making us all go inward and create this world of just us. Overall it’s about the good, but it pokes fun at the idea of, ‘Hey, look at me, I’m taking a picture on Instagram and it has 40,000 likes.’”

Nash and Calvillo aren’t the first six-second personalities to make the feature-film or TV leap: Rainn Wilson’s Hollywood and Vine series is in production, and teen scream elicitor Cameron Dallas landed his own movie. Nash is looking to raise $200,000 to fund the film, which is expected to debut at the end of the year.

With vines, he says, “every little bit counts, because you’re going to be watching it 100 times, and each time you watch it you see something new.” It’ll be interesting to see how that transitions to a feature film.