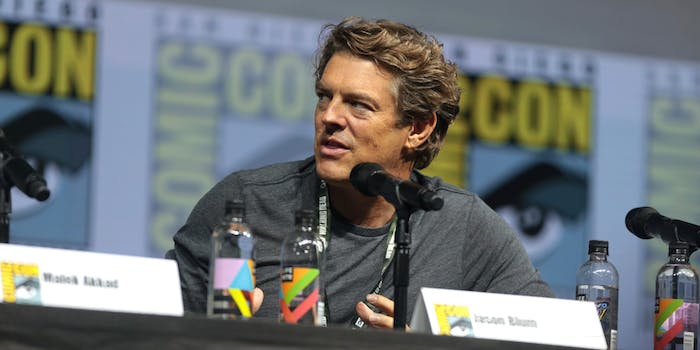 Jason Blum admits he can do better.

Jason Blum is apologizing after his comments about his belief that female directors don’t want to direct horror films drew near-universal outrage online.

Over the past few years, the horror-centric production company Blumhouse Productions, which Blum founded in 200 and serves as its CEO, has churned out one hit after another. But even though some of those films center around female characters—such as the upcoming Halloween sequel that stars Jamie Lee Curtis, Judy Greer, and Andi Matichak—a woman has yet to direct a horror film released theatrically by Blumhouse. (Previous films directed by women that Blumhouse has produced have either gone straight to video or were not horror films.)

After being asked about it by Polygon, Blum noted that Blumhouse was always trying to get female directors on board, but it had yet to work out. He also pointed to his belief that female directors being less likely to be interested in horror films.

“There are not a lot of female directors period, and even less who are inclined to do horror,” Blum told Polygon. “I’m a massive admirer of [The Babadook director] Jennifer Kent. I’ve offered her every movie we’ve had available. She’s turned me down every time.”

Blum also mentioned offering every project he’s had in the works to Leigh Janiak (whose name he needed the help of an assistant and an executive to remember), who has turned him down due to scheduling.

Blum’s comments, to put it lightly, didn’t land well online. For one, Blum’s assertion that there aren’t many female directors or female directors interested in horror is just not true. There are many beyond the two directors that Blum has tried to work with, and just because Kent and Janiak turned him down doesn’t mean that female horror directors don’t exist.

As the backlash to his comments grew, both film aficionados and reporters alike made lists of directors Blum could talk to. Some directors also threw their hat into the ring.

Hi @jason_blum I wanna make horror movies. I’ve directed a couple shorts and a music video. I’m working to get a feature made so I can demonstrate what I’m capable of. I have a good eye and a knack for story. Lots of potential but not the resources. Can’t wait to chat someday! https://t.co/rbQkwfrtBh

@jason_blum I'm a director looking to direct my first feature, film "Gemma." It's a Black lesbian ghost horror love story set in rural Wisconsin. I have been an @Outfest and @Athenafilmfest screenwriting fellow for that script. Female directors do exist. You're just not looking. pic.twitter.com/mzClEeaAi0

“There are not a lot of female directors period, and even less who are inclined to do horror,” Blum says.” @jason_blum female horror director over here! 👋 would love to direct for @blumhouse https://t.co/wlufMoGBxH

But Blum’s comments, while frustrating, are also part of a bigger problem in Hollywood. Female directors exist and have been directing horror films for decades, but there aren’t more of them being given bigger films like Halloween because they aren’t offered the opportunity. And many of them aren’t given the same opportunities as their male colleagues with similar experience because women often have a higher threshold to cross to prove that they’re capable of directing a film.

In that same Polygon interview, Blum also toted how his production company was able to entice directors who don’t have a horror background like Jordan Peele and Halloween director David Gordon Green to work with them. And while it’s too soon to know how Halloween will do at the box office, investing in Peele and Get Out gave Blumhouse its most successful movie to date, along with four Oscar nominations. (Peele won for best original screenplay.)

I’m glad we had this talk about Jason Blum and female directors. It’s a something that needs to be dragged out into the light. But he’s NOT THE ONLY ONE. A lot of execs, managers, and agents have a female director blind spot. He just let a reporter see that.

To make one thing clear, as much as I don't think Jason Blum is the enemy, it is depressing that women directing big horror movies is still as much of an anomaly in 2018 as it was when Mary Lambert directed Pet Sematary. And yes, it's up to powerful men like Blum to change that.

Blum eventually issued a lengthy apology and thanked everyone who called him for his “dumb comments,” blaming his passion for how the comment came out. He noted that while women are largely responsible for running Blumhouse and coming out to see Blumhouse movies, he could do better.

“Some of our most successful franchises are anchored by women, including the one opening tomorrow/today, led by the biggest female legend in this genre,” he wrote. “But we have not done a good enough job working with female directors and it is not because they don’t exist.”