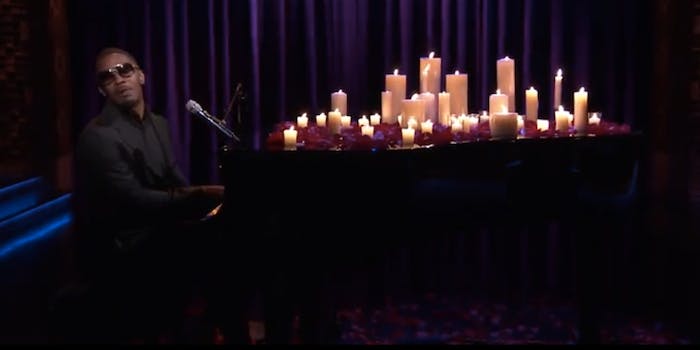 Did someone say "tupperware"?

There’s nothing sexy whatsoever about those words. (OK, a case could be made for that last one.) But it’s amazing what some candles, rose petals, and the silky-smooth voice of Jamie Foxx can do.

For The Tonight Show Starring Jimmy Fallon, the moonlighting R&B crooner sings “a list of unsexy words in a super sexy way,” as the host put it.

It’s a simple concept executed to perfection. Just the thought of lentils after this will get you heated up.

In short, this is why Seth Meyers doesn’t stand a chance in the late-night game. Fallon is winning in prime-time and online, with hilarious bits that go over great in real time and even better on YouTube the following morning. He has a better house band, better writers, and far more entertaining recurring features. Fallon’s simply not leaving Meyers any room to work when batting cleanup.

Screengrab via The Tonight Show/YouTube