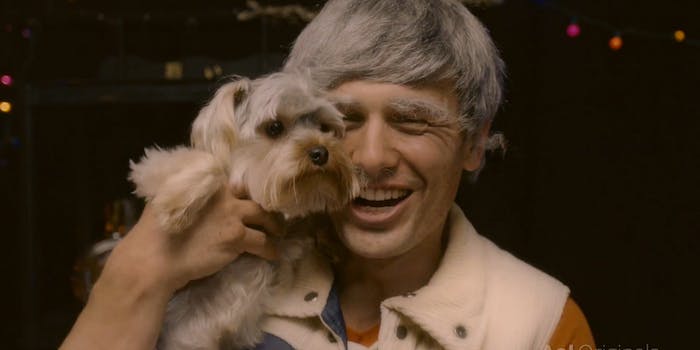 Well that got meta.

At the start of every episode of season 2 of James Franco’s surprisingly good webseries Making a Scene, he spins a wheel of TV show titles to decide which two he’ll mash up. In past episodes he’s spun things like Friendtervention or Seinfeld M.D. to great success.

But this week, he spun That ’70s Show twice. Like a true improviser, instead of cutting around the double-whammy and spinning the wheel again, Franco stuck to his guns and gave us a scene from That ’70s 70s Show.

The scene asks a simple question: What if the characters from That ’70s Show never left the Foremans’ basement, and now they were all north of 70 years old?

It’s a great excuse for Franco to showcase his Ashton Kutcher and Topher Grace impressions.

Screengrab via Making a Scene with James Franco/AOL