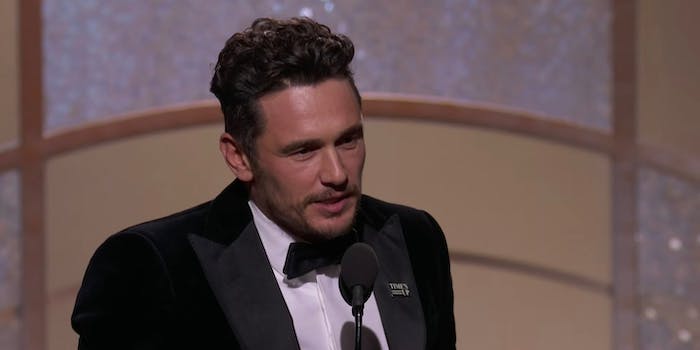 Franco has denied all of the allegations.

Five women have come forward to say that James Franco sexually exploited them and behaved inappropriately while he taught or mentored them, according to a new report from the Los Angeles Times.

Some of Franco’s alleged inappropriate behavior took place within the confines of acting classes run by Franco or on the set of Franco’s films. The class promised students that they might be cast in some of Franco’s films, but the roles rarely came up—and if they did they often involved nudity. Franco’s school, which he started in 2014, suddenly closed in the fall.

“I got it in my head pretty quickly that, OK, you don’t say ‘no’ to this guy,” Tither-Kaplan told the Los Angeles Times.

Some of the women say that Franco encouraged them to take off their clothes while performing sex scenes and would get mad if nobody volunteered. Some of the scenarios behind Franco’s art films, which some of his students participated in, were described as unprofessional.

Violet Paley, who also posted a tweet about Franco on Sunday, said that she and Franco initially had a consensual relationship but Franco pulled out his penis while they were in her car and pressured her to give him oral sex.

Through his attorney Michael Plonsker, Franco has denied all of the allegations. In the case of Tither-Kaplan, Plonsker used her social media posts while filming The Long Home to demonstrate that she had a positive experience while filming. Plonsker also pointed to Franco’s previous appearance on The Late Show, where Franco said that tweets being made about him were false but he supported women coming forward and promised that “if I’ve done something wrong, I will fix it.”

“The others, in my life I pride myself on taking responsibility for what I’ve done,” Franco told Stephen Colbert. “The things I heard are not accurate, but I completely support people coming out because they didn’t have a voice for so long. I don’t want to shut them down in any way. I think it’s a good thing and I support it.”

Franco also appeared Wednesday on Late Night, where he faced similar questioning from host Seth Meyers, who asked Franco why he hadn’t reached out to Ally Sheedy, who called him out on Twitter with the hashtag #MeToo.

You can read the full report at the Los Angeles Times.