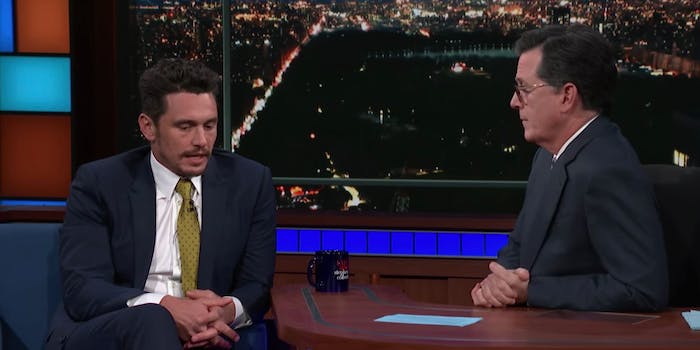 'I can’t live if there’s restitution to be made.'

James Franco was among the many men who wore a Time’s Up pin to the Golden Globes Sunday night—as well as one of several men whose rumored misconduct resurfaced in the wake of that support. And now Franco has addressed what several women have said about him.

Franco on Tuesday faced stern questioning from Stephen Colbert, who prefaced an uncomfortable interview by noting that he told Franco ahead of time that he would be asking about the accounts made in the aftermath of the Golden Globes. Colbert didn’t say much and let Franco (and the silence while Franco gathers his thoughts) speak for itself.

Franco iterated his support for the Time’s Up movement, noting that he was proud to support change not just in Hollywood but in other aspects of society such as the push to get underrepresented people into leadership positions. But he had no idea what Ally Sheedy, who he directed in the 2014 off-Broadway play The Long Shrift, was referring to in her since-deleted tweets where she asked why Franco was allowed at the Golden Globes and tweeted “#MeToo.”

He also denied what multiple women have said about him on social media, which included one woman who said that Franco exposed his penis to her and also attempted to proposition her friend at 17. (Another woman came forward and said Franco told her that nudity she had done in his films was not exploitive.) In 2014, Franco said he “used bad judgment” after messaging a 17-year-old girl on Instagram.

Since those stories have emerged, the New York Times has canceled an upcoming event with Franco and cited these stories as the reason behind the cancellation.

Franco noted that he hadn’t specifically read what the women have said on Twitter but he knows what those tweets entailed. And though he denies the allegations he supports women coming forward with their stories.

“The others, in my life I pride myself on taking responsibility for what I’ve done,” Franco said. “The things I heard are not accurate, but I completely support people coming out because they didn’t have a voice for so long. I don’t want to shut them down in any way. I think it’s a good thing and I support it.”

As for how to drive the conversation forward so that everyone is able to come to an understanding, Franco said he’s willing to listen and strive to make things right.