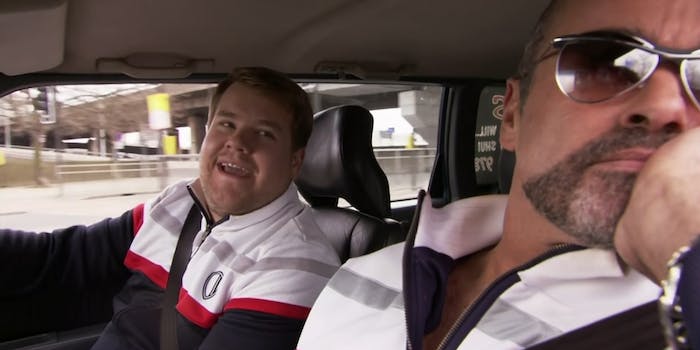 Screengrab via The Late Late Show With James Corden/YouTube

Without George Michael, there would be no 'Carpool Karaoke'

James Corden used his first Late Late Show of the new year to pay tribute to one of his musical heroes.

Like the rest of the world, Corden was devastated to hear of George Michael’s sudden passing last week, but for him, it hit particularly hard because he knew Michael and worked with him in a 2011 Comic Relief sketch on Red Nose Day. Fans will surely recognize the beginning of what is now known as “Carpool Karaoke,” and it’s an absolute delight.

Michael’s magic worked long after it aired. When Corden first started working on The Late Late Show, he tried to get musicians to do “Carpool Karaoke” with him and sent them video of his sketch with Michael to show what it looked like. Mariah Carey ended up being the first artist to say yes after seeing the video, telling Corden, “If it’s good enough for George, then it’s good enough for me.” And the rest is history.