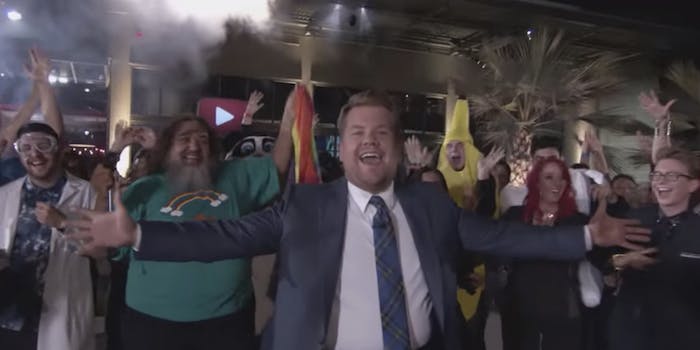 Can you spot all the viral video references in James Corden’s YouTube tribute?

What better way to explain YouTube to a mainstream TV audience than with a musical number? James Corden is doing just that in his opening for a YouTube-centric edition of The Late Late Show.

“It’s YouTube, where time goes goes to die!” croons Corden while a man in a banana suit dances behind him.

YouTubers have made appearances on talk shows and late-night TV before, but Corden is the first to dedicate an entire episode solely to digital celebs.

“We’d be lying if we said we weren’t reaching out to a certain extend to that new crowd to say, ‘this show is for you, and late night is for you,’” Corden told the Hollywood Reporter about his intentions with the show. Corden has used YouTube to build his base in the months on the air without a Late Show lead-in. Stephen Colbert will take over Sept. 8, and he’s already building his own YouTube presence as well.

Corden’s musical number taps into the stereotypes of YouTube users, with lines like, “It’s always there for anyone who should be working,” and it strokes the egos of the platform’s creators by calling it “the greatest gift that God could ever give” and “your reason to live.”

The video does rely on older and decidedly mainstream YouTube “viral videos” to set up its jokes, instead of speaking to the YouTube landscape of today. There are mentions of Double Rainbow, Charlie Bit My Finger, and the Harlem Shake. But the show can get away with the vintage feel, since it’s also a celebration of YouTube’s 10-year anniversary.

As for the guests, they’re decidedly current, with the episode featuring YouTubers like Tyler Oakley, Jenna Marbles, and the guys behind Epic Rap Battles of History. The episode airs Aug. 21, and then—naturally—in clips on YouTube.