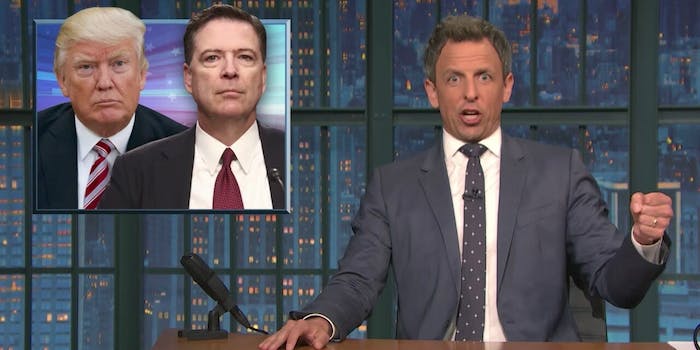 Here’s how late-night reacted to the Comey hearing

They went all in.

After hyping up former FBI director James Comey’s testimony before the Senate Intelligence Committee, many late-night hosts devoted chunks of their monologues to picking it apart.

Stephen Colbert called Comey’s appearance before the Senate “St. Comey’s Day” and circled in on one of his bigger revelations to the Senate: the reason Comey took such detailed notes is because he believed that Donald Trump would ultimately lie about what happened in the private meetings they had.

“He thought Trump might lie?” Colbert asked. “That’s razor-sharp F.B.I. instinct in action right there. ‘Fellas, look. Look fellas, I don’t want to get out over my skis here, but I think this dead body might not be alive.’”

Colbert also had a theory about how the White House was able to keep Trump distracted long enough so he wouldn’t tweet during Comey’s appearance before the Senate, which involved anchors from Colbert’s InfoWars parody news show dangling keys and offering ice cream.

Jimmy Fallon was also not too surprised by Comey’s assertion that Trump would lie.

“Even Trump was like, ‘Yeah that sounds like me,’” he said.“’Good thinking. That’s good thinking on your part.’”

According to Seth Meyers, it can be difficult for some to sense just how big Comey’s testimony—and his belief that he thought Trump would lie about their interactions—is after everything else has happened. (And a lot has happened since January.)

“Now if it feels to you like there weren’t any new bombshells today, that’s because we are already surrounded by previous bombshells,” he said. “Our capacity to be shocked has already been so worn down by the Trump presidency, he’s like your druggie cousin who can no longer surprise you. ‘Kevin traded Aunt Janet’s cat for Robitussin.’ ‘Uh-huh. Did he?’”

He also highlighted the absurdity of the Republican response—that Trump is just learning how to be president on the job—because that’s not how it works for basically any other job, even entry level jobs.

Conan O’Brien took a lighthearted approach to the testimony, which showed his heavy-handed attempts to advertise his show while Comey’s testimony aired on CNN (TBS’s sister station).

Trevor Noah, on the other hand, touched on the nature of Comey’s testimony itself. He noticed how often Comey said that he couldn’t answer certain questions in open session, which—despite everything we did learn—left Noah wanting for more.

“With all of these closed session answers, it felt like after this hearing we walked away with more questions than we had coming in,” Noah said. “I mean, today’s hearing was cool and everything but basically it was like listening to a clean version of a hip-hop song. It felt like we missed all the explicit parts.”