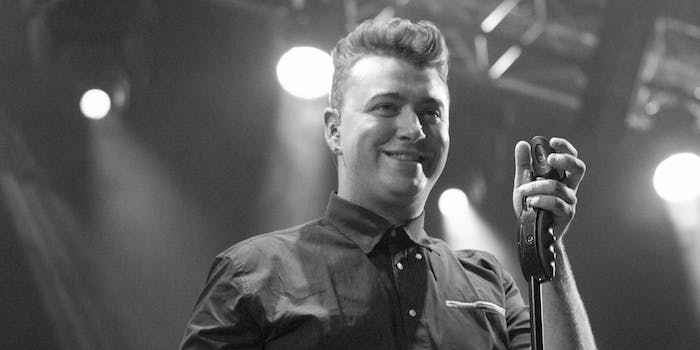 Side Stage Collective/Flickr (CC BY ND 2.0)

You'll have this on repeat all day.

James Bond’s next grand entrance is finally here, courtesy of one of the U.K.’s biggest pop stars.

The theme song to Spectre, “Writing’s on the Wall,” has been posted on Spotify. Sam Smith performs the song, which he cowrote with Jimmy Napes, making him the first British male solo artist to perform a Bond theme since 1965.

Although Smith initially denied that he would be performing the theme, it was confirmed earlier this month. In a statement, Smith called it “one of the highlights of my career.”

“I am so excited to be a part of this iconic British legacy and join an incredible line up of some of my biggest musical inspirations,” he said. “I hope you all enjoy the song as much as I enjoyed making it.”

The somber “Writing’s on the Wall” fits right in with the rest of Smith’s discography, with lyrics such as “If I risk it all, could you break my fall?” and “How do I live? How do I breathe? When you’re not here I’m suffocating” The song pairs these lyrics with strong brass and violins. You’ll probably be listening to this on repeat until Spectre arrives in theaters later this year.

Considering that the last Bond theme, Adele’s “Skyfall,” won both the Golden Globe and the Academy Award for Best Original Song, “Writing’s on the Wall” has some big shoes to fill.

H/T The Hollywood Reporter | Photo via Side Stage Collective/Flickr (CC BY ND 2.0)