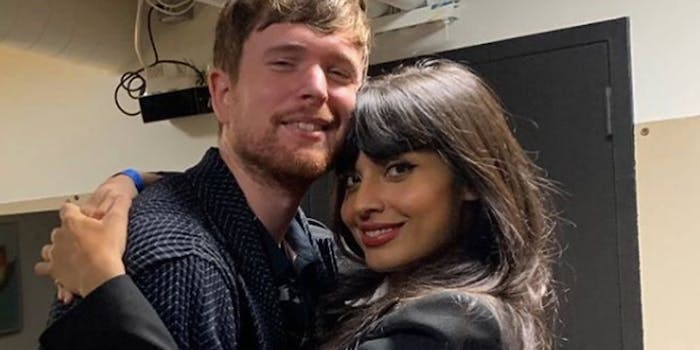 Jameela Jamil has been a target of constant online criticism ever since using the fame she gained from The Good Place to champion causes she believes in. While some of the criticism may have merits, things took a sharp turn last week when Brooklyn-based writer Tracie Egan Morrissey tried to “prove” Jamil has Munchausen syndrome, a mental disorder in which someone pretends to be sick.

Jamil has already refuted the accusations in a series of scathing tweets, and now her longtime boyfriend, musician James Blake, is speaking up to support her.

“It’s pretty disgusting to watch the woman I love just be dog piled on every day for such ridiculous things,” he wrote in a statement posted to Twitter.

Blake revealed that Jamil had initially asked him not to comment on the allegations.

“She’s just done her best as an ever learning human, as most of us are, to help other people with her privilege,” Blake continued. “She does this because she had such a difficult life. Because she doesn’t want others to feel alone, gaslit or ashamed the way she has.”

Jamil and Blake have been dating since 2015, and he went on to detail all the diseases and injuries, diagnoses, and operations that he has been present for–the same ones Egan Morrissey and her supporters are accusing Jamil of faking.

“I am there when she turns down amazing job opportunities because of her health limitations,” he said. “I actually live with her. Her being attractive, tall, and successful doesn’t mean she hasn’t been sick.”

Jamil herself has denounced the denial of her illnesses as a form of gaslighting “people whose illnesses aren’t visible.”

Meanwhile, Blake touched specifically on Jamil’s struggles with Ehlers-Danlos syndrome, a rare connective tissue disorder with symptoms that can be quite painful but not particularly apparent to the outside world.

“More and more people are discovering they have it, but because it’s vastly under researched and the patients, as with most invisible disabilities look well, people constantly doubt and mock those suffering,” he wrote.

The crux of Blake’s defense of his girlfriend seems to be complete bewilderment over why people online are so intent on digging into any possible way to criticize and tear down someone who seems to at least be making an effort to do some good in the world.

“You don’t know this woman. … You don’t know what her life is, and has been like. But I do, and I’m not gonna stand by and let some total strangers try to push my girlfriend over the edge to what… stop her from helping kids with eating disorders? Stop removing mainstream shame of talking about mental health?” he wrote.

At this time, Egan Morrissey is still planning to release further “investigation” into Jamil’s alleged lies about her health. But if you’re hoping to read it, be prepared to fork over some cash, because this whole controversy has been a way of pointing people to hop over the paywall on her Patreon.