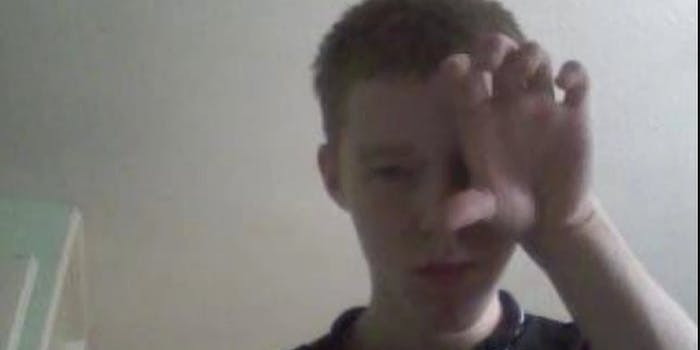 James Bassett's last wish: that pop star Lady Gaga see the tribute book he assembled for her. Can Twitter and YouTube make it happen?

How can a celebrity not honor the dying wish of a loyal fan?

Three days ago, YouTube user littlemissgreen uploaded a video featuring a photo montage of a 16-year-old boy played to Lady Gaga’s piano version of “Hair,” a song from her recently released album Born This Way.

The video description also asks all fellow monsters to tweet the video at Lady Gaga under the hashtag #MonsterJamesLastWish. Their efforts were not in vain: Late Wednesday, Lady Gaga tweeted the video herself.

Through the video we learn the boy is James Bassett, recently deceased, cause of death unstated. Bassett, it is clear, was an avid Lady Gaga fan, even making a book of what appears to be photos and newspaper clipping of the pop singer.

The video makes a plea to “Mother Monster,” as Gaga style herself to her fans, the “little monsters,” to “find a way for James[‘] mum to give this book to you” as her son’s dying wish.

It’s hard to watch the video and not tear up, as yours truly did. The video currently has just under 1,000 views, yet it has drawn 300 comments, most of which express sympathy, some asking about the circumstances of Bassett’s death.

Online evidence suggests the video and story are authentic. A memorial page to Bassett was set up months ago on Facebook. One of the posts was “liked” by an account belonging to Doreen Bassett, who lists herself as a fan of Lady Gaga. And a Twitter account, @Thejamesmonster, last tweeted in October 2010.

It all speaks to a powerful human urge, celebrated by Gaga among many others: the urge to leave a mark, to be remembered, to not fade away.

Gaga tweeted that she planned to email James’ mom, whose email is included in the video. Will the powers of Twitter and YouTube prevail and unite James’ tribute with the star? The Daily Dot will be watching.