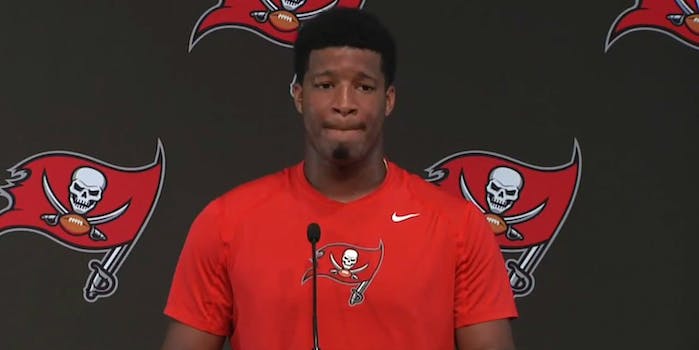 The NFL is investigating.

A letter written by Lisa Friel, the NFL’s special counsel for investigations, was reportedly sent to the female driver. “The League has been informed that you may have been the victim of such a violation perpetrated by Tampa Bay Buccaneers player Jameis Winston,” the letter states. “The league takes allegations of this nature very seriously and has opened an investigation into this matter.”

Just last year, Winston settled in a civil lawsuit brought by a woman who said he raped her.

An NFL spokesperson confirmed the investigation in a statement to BuzzFeed, saying, “The matter is under review. The allegation was shared with the NFL and we have reached out to Uber to request any information they may have.”

The alleged Uber incident happened on March 13, 2016, in Scottsdale, Arizona. The female Uber driver, identified only as “Kate” in the report, said Winston immediately starting acting up, shouting “homophobic slurs” at pedestrians. Then, as they were waiting at a drive-thru, he allegedly reached over and grabbed her crotch, holding his hand there for three to five seconds until Kate looked up in shock and asked: “What’s up with that?”

“I mean he’s an NFL quarterback and I’m 5 ft 6. I’m not prepared for that. So I completely froze,” Kate told BuzzFeed.

Kate filed a complaint to Uber 10 days later. “Apparently a big athlete in the nfl” reached over “and put his fingers on my crotch,” it said. She added, “…it wasn’t my stomach or thigh, it was my crotch and I want to be clear about that,” and ended the complaint warning, “He is NOT safe for other drivers.”

Uber responded to her complaint shortly after, saying the driver’s behavior is “absolutely not tolerated on the platform” and recommending she reach out to law enforcement. Kate told BuzzFeed she didn’t call the police for fear of negative attention and backlash from football fans. Uber banned Winston and removed his account from the app soon after the complaint was filed.

Winston’s agent, Russ Spielman, denied the allegations in a statement: “We categorically deny this allegation. It is our understanding the Uber driver was unable to identify the specific individual who allegedly touched this driver inappropriately. The only reason his name is being dragged into this is that his uber account was used to call the ride.”

Winston then released his own statement, claiming the allegations are “false” and suggesting the driver was confused as to who was sitting next to her. The statement does confirm that Winston was in the vehicle.

Here is statement from Bucs QB Jameis Winston in response to allegation of him groping a female Uber driver in Arizona in 2016. Calls the allegation "false," said he denied same allegations to Uber when they were made. pic.twitter.com/xKyrvsXObT

The Tampa Bay Buccaneers also released a statement regarding the incident: “We are in the process of obtaining further information regarding today’s media report. We take these matters seriously and are fully supportive of the investigation that is being conducted by the NFL.”

In late 2016, Winston settled a civil lawsuit with Erica Kinsman, who said he raped her in 2012 while they were attending Florida State University. The terms of the settlement are confidential. Kinsman also sued Florida State University over the incident and received $950,000. The case became the subject of a cover-up by the university and local police as detailed in a New York Times report and the 2015 documentary The Hunting Ground.