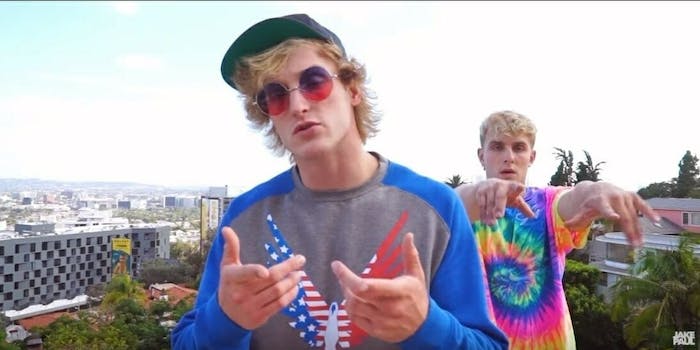 ‘People lump us together.’

YouTube isn’t the only brand being affected by the negative press around Logan Paul‘s antics. His brother is feeling the pressure too, and he’s siding with YouTube over its latest punishment.

During an interview with TMZ earlier this week, Jake Paul—who’s currently embroiled in a feud with KSI and who’s faced plenty of controversy himself in the past several months—said he understands why YouTube is cracking down on Logan Paul’s account.

“[The punishment] feels like a lot, but I think they know what’s best for their platform,” Jake Paul said. “They’ve treated us amazing over the years. My brother needs to get better at determining what he should put in his videos. Kids are watching.”

The trouble began for Logan Paul at the beginning of the year when he posted a video of a dead body in a Japanese “suicide forest.” YouTube responded by kicking him out of the Google Preferred program, drastically cutting his advertising earnings. After about a month away from daily vlogging, Paul returned to the platform and almost immediately found trouble again, posting a video of himself tasering a dead rat. That led YouTube to strip away all of Paul’s ad revenue, and in a recent blog post, the site laid out further punishments for content creators who harm the community with inappropriate videos, including the ability to “remove a channel’s eligibility to be recommended on YouTube, such as appearing on our home page, trending tab or watch next.”

Logan Paul hasn’t responded publicly to his latest punishment, but Jake Paul said that Logan’s antics are also hurting his own brand.

“Of course,” Jake Paul said when asked about the effect on his brand. “People lump us together.”

Jake Paul has courted controversy as well, saying the N-word multiple times in a freestyle rap, facing accusations of bullying fellow YouTubers, and calling one of his own fans a “terrorist.” But compared to Logan Paul’s recent antics, Jake Paul has kept himself out of trouble for the past month or so. And he understands YouTube’s stance against his brother.

“I get it,” he said. “I do think Logan has good intentions, and he’s good person. I’m his brother, and I know him the most. I get where he’s coming from. But YouTube has to protect their platform. He’s just one creator on the platform.”