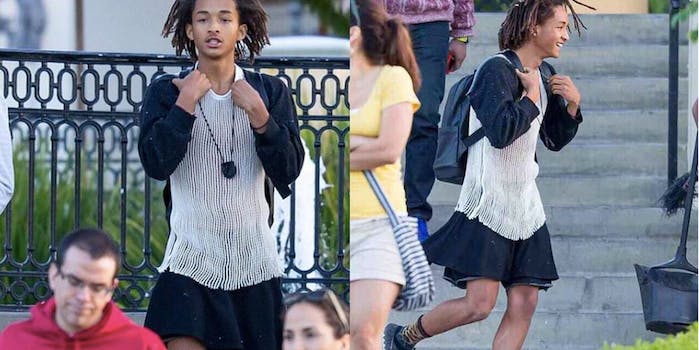 Why was Jaden Smith wearing a dress?

Jaden Smith is known for some out-there antics, but on Friday Twitter exploded because the son of the son of Will Smith and Jada Pinkett-Smith was spotted wearing a dress.

What’s even better, though, is Smith’s own tweet about his dress-wearing day. For Smith, there’s no drama, except for the fact that when you’re pantsless sometimes swerving too hard can be problematic.

That Moment When Your Wearing A Dress With No Pants And You Swerve Way To Hard.

Smith has one of the most interesting Twitter personalities, and he’s no stranger to a dramatic outfit. When he wore an all-white Batman suit for Kim and Kanye‘s wedding, all heads turned. When he gave a particularly weird interview with his sister, Willow, we even turned to some stoned comedians to give a dramatic reading.

But while we sometimes raise an eyebrow at Smith’s antics, his tweet about his dress-wearing moment is totally on point.  Sometimes you simply just swerve way too hard.