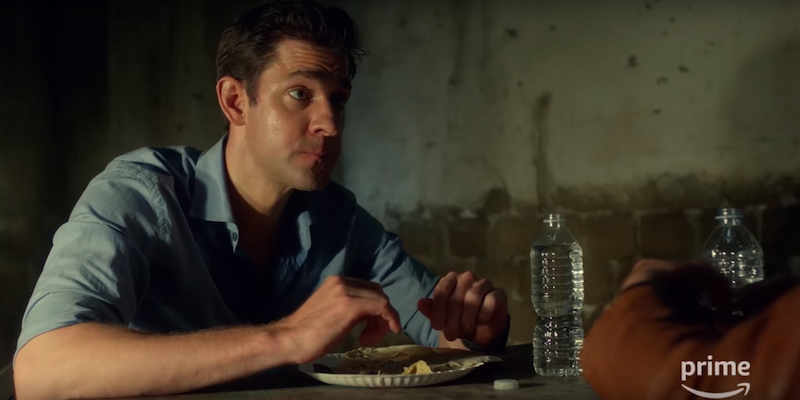 The series is at odds with the political moment it's landing in.

Since 1990’s adaptation of The Hunt for Red October, Tom Clancy’s unlikely action hero Jack Ryan has been played by Alec Baldwin, Harrison Ford, Ben Affleck, and Chris Pine, respectively, with each iteration striving to adapt the character for the political and cultural landscape of the moment. Ford’s portrayal in Patriot Games and Clear and Present Danger is arguably the version that’s most lodged in the public consciousness, but now Jim from The Office is taking a stab at making the character his own in a new Amazon original series. The results are decidedly mixed, mostly because this version of Jack Ryan never quite seems sure of what sort of show it wants to be, fronted by a bland protagonist who is frequently less interesting than the bit players and a storyline that feels oddly anachronistic in the political landscape of 2018.

That’s no dig on John Krasinski, who does his best to sell a Ryan recovering from scars both physical and mental. The series earns points for not trying to make Krasinski’s Ryan a Jack Bauer-style badass—that’s never been what the character was about. However, in spite of introducing Ryan as a wounded veteran turned CIA financial analyst and desk jockey, he nevertheless slips into action-hero mode a little too adeptly whenever narrative convenience calls for it. Sure, Ryan’s up-close-and-personal fight sequences do their best to sell him as anything but a superhero, but ultimately we’re left with a sense that Krasinski might just not be the right fit for this role—especially if you watch Jack Ryan, as this reviewer did, shortly after revisiting his stellar performance in A Quiet Place. Krasinski’s Jack Ryan is serviceable, but also shallow and lacking in the flaws and complexities that could make the role sing.

The Wire’s Wendell Pierce proves more memorable as Ryan’s CIA supervisor, James Greer, an agency veteran facing a hamstrung career after a mistake in the field. He and Ryan initially butt heads, but he soon becomes convinced that Ryan’s theories about an emerging new terrorist leader carry weight, and the two become de facto partners as they attempt to pin down the whereabouts and plans of Mousa Bin Suleiman (Ali Suliman), a charismatic extremist who looks to be the biggest threat since Bin Laden. Greer is also soon revealed to be a Muslim—he converted in order to marry his now-ex-wife—but while this thread grants Pierce a few good scenes, it too often feels like a prop wielded to defy expectations more than a naturalistic part of the character. That’s a real shame because it could be rife with potential if surveyed by stronger writing, and I have no doubt Pierce could knock it clean out of the part if given the chance. Greer, done well, would easily make a more compelling protagonist than this version of Ryan—but that’s not an incredibly high bar to surmount.

The show makes some interesting storytelling choices, spending as much time with Suleiman and his family as it does with the American agents pursuing him, but Suleiman’s best scenes—small moments with his brother or children, flashbacks to his earlier years that attempt to explain how he was set on the course for jihad—are ultimately abandoned in favor of reducing him to a largely two-dimensional villain, going through the paces of a nefarious plot that feels like it was cribbed from a mid-run episode of 24.

That speaks to a larger problem with this iteration of Jack Ryan—it feels as it’s arriving around a decade too late. While issues of Islamic extremism, terrorism, and the clash of cultures are certainly still at play in our modern world, this story could easily have aired in, say, 2009, and required almost no revisions. Given how different our world is right now—our politics more divided than ever, and the politics of hate as resurgent on the home front as they are in any far-flung foreign land—it feels almost naive to try and sell a sprawling espionage thriller that makes almost no acknowledgment of those changes at all.

Indeed, the closest the show comes to feeling “of the moment” comes in the form of a subplot following a conflicted American drone pilot’s attempts to deal with the guilt he feels from spending his days in a trailer, killing people on the other side of the world via a video game interface. Unfortunately, as with most of the show’s potential, it’s never convincingly incorporated into the overall flow of the story, left instead as an interesting distraction that in the long run only adds to the show’s pacing problems and the sense that it’s all an ill-considered casserole that sounded better in theory than in execution.

None of this is to say that Jack Ryan is bad, exactly—it’s not. The action sequences are well-staged and there are some clever twists along the way. However, the end result is frustrating simply because, in the right hands, this Jack Ryan could have been something special. Given that the show has already been renewed for season 2, perhaps it will get the chance to find its footing and improve on its flaws. But if we’re once again dragging Jack Ryan away from his Cold War roots, the show needs to do a better job of figuring out how he can be relevant and interesting three and a half decades later.