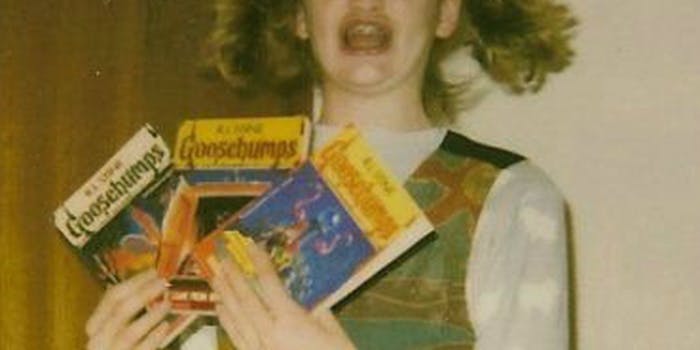 Gersberms Girl is a meme so awkward it’s almost painful.

The meme reportedly started in March after a photo of a smiling girl with braces, holding three Goosebumps books, circulated around Reddit’s r/funny group, according to Know Your Meme. The community dubbed her Gersberms Girl, which is a lisped pronunciation of Goosebumps, created by a speech impediment caused by a retainer.(She is also known as Ermahgerd, which is a mispronunciation of “Oh my God.”)

That speech impediment has become a meme of its own, with people all around the Internet using variations of the garbled pronunciation to express joy or excitement. But thanks to a clever new application from developer J. Miller, you can recreate the impediment with any word or phrase.

“I’m an avid redditor, so of course have seen the Ermahgerd meme many times, but it was ‘Ermahgerd Hertspert’ that finally got my attention,” Miller, 27, told the Daily Dot.

“For some reason, I was laughing at that all day. I shared that with my co-worker Will, and we couldn’t help but start talking like that. It was then that I realized a translator must be built.”

The simple app allows users to input any phrase they want and have it translated into Gersberms Girl-speak. The app took about an hour to build using a Javascript framework called Angular JS. Miller posted the initial app to Reddit, where the community pointed out some translation problems that took a bit more time to fix.

“The main translation, of course, is converting vowels to ‘er,’ but it gets more complicated than that, because ‘life’ should be converted to ‘lerf’ rather than ‘lerfer,’” Miller said.

“I’m sure the translator could work even better if it took into account the phonetics of the words, but for an evening project, I’ve programmed enough of the cases to make it a pretty solid translator.”

Miller has been overwhelmed with the responses to his app. It has been featured on the Huffington Post and has collected more than 5,000 Facebook likes. He’s currently working on a bigger app, which will be released soon. In the meantime, ers jerst ernjin da lerghs.

“I’ve been enjoying the reaction to it, watching it spread virally,” Miller said. “I posted it to Reddit, thinking it might get a few laughs, or it might get buried, but am so glad to see it successfully spreading around the interwebs.

“I’ve heard from many people how it brightened their day, which makes me happy. On the other hand, the collective man-hours that have been spent laughing at this totals to over a year, so I feel guilty about the lost productivity around the world.”