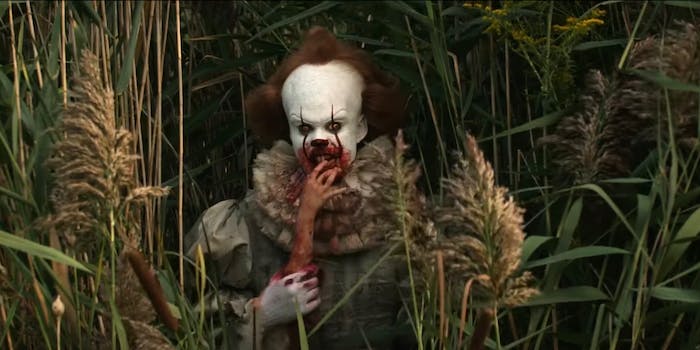 The ‘It’ Honest Trailer shows how Pennywise only has one move

The Loser's Club should've just let it be.

It tapped into the heart of the ’80s to bring us a remake of the Stephen King classic, but like many horror stories, it’s one that could’ve been easily avoided if its characters just paid attention to the details.

As Screen Junkies pointed out in its latest Honest Trailer, Pennywise the clown uses the same motive on pretty much all of the kids he targets in Derry, Maine: Once the kids are alone, they’re led into investigating something odd in their surroundings. And when they least expect it, Pennywise strikes, scaring the Loser’s Club and mauling just about everyone else in the process. Granted, It is a large book—large enough that a sequel will tackle what happens when the Loser’s Club kids return to Derry as adults—but it leaves plenty out including the turtle and most of Mike Hanlan’s characterization.

But it’s also weighed down by its own nostalgia for the ’80s with everything from specific movies cited at the theater to the casting of Finn Wolfhard—who is already in the nostalgia-heavy Stranger Things—as Richie. But if your clown can out-creep Tim Curry’s Pennywise, then you might have something special on your hands.