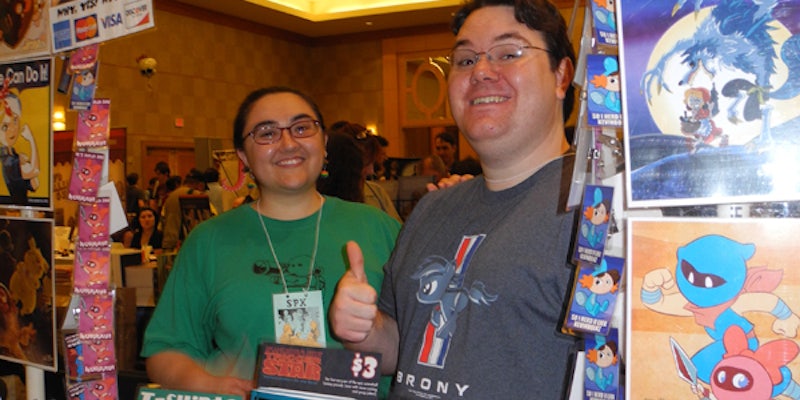 Baltimore's Kevin Bolk, the artist behind Sucks to be Weegie has learned, “Internet famous does not equal real famous.”

Thirty thousand people visit his website every week. And yet, said cartoonist Kevin Bolk, only two of them have recognized his face today.

“Are you the guy who does Sucks to be Weegie?” he asks, naming one of Bolk’s most popular comics.

“I wouldn’t have known! You look nothing like your cartoon,” the fan replies.

This is an example of the reaction Bolk gets most frequently. The 31-year-old Baltimore native has made it big online, but he has yet to obtain real life fame.

“What I tell people is Internet famous does not equal real famous,” he said. “Online, it’s more nebulous. I always think only five people like my comics. When people come up to me in person, it’s amazing.”

Web comic artists with millions of readers exhibit their work at Small Press Expo. But more often than not, their fans are seeing their faces for the first time.

Josh Lesnick, a 34-year-old Web cartoonist from Austin, said that people tend to recognize him from his scribbled self portraits. However, he said it doesn’t make much sense for a Web comics artists like himself to attend conventions.

“When I get to an in-person event, it doesn’t work very well because I don’t have a product available in person,” he said.

At SPX, Lesnick is selling a $100 limited edition box set of his recently completed comic, Girly. Even though Girly had tens of thousands of readers, he said he isn’t expecting to make a big profit.

“Girly was seven years of my life,” he said. “I made the box set and figure to give myself and my fans something to commemorate it with.”

On the other hand, Meredith Gran of Octopus Pie said she usually sells a lot at in-person conventions. Shot glasses with etched drawings of her characters sit at her booth, but the 26-year-old sells two of them as we speak.

“Products like my shot glasses sell better at conventions,” she said. “People want to buy things directly from the creator. They want to look them in the eye.”

Gran, whose comics get 15,000 hits every day, said she is sometimes recognized in her native Brooklyn, but rarely at conventions.

“People recognize my comics before my face. They look at the comics and ask if I’m the creator,” she said.

If anyone at SPX has transcended from Internet fame to real life fame, it’s Jeph Jacques, a 31-year-old from Easthampton, Massachusetts. His Web comic, Questionable Content, gets 400,000 hits a day. A line of fans trails around other booths as people try to get a sketch from Jacques.

“It’s common for people to recognize my face,” he said. “Sometimes it happens on the street.”

But for a man who describes himself as shy, minor celebrity can be a paradigm shift.

“I talk with fans on Twitter and Livestream all the time, but in person, it’s really more surreal,” he said. “They’re really excited to see me so I have to put on this outgoing facade for a day.”

Jacques’ comic has been online for eight years, but there were also many new faces at SPX. These were some of the cartoonists fans were passing by to visit Jacques’ table.

Matt Czapiewski of Eat That Toast said he had not met any fans that day. This despite the fact that his year old comic made the front page of Reddit just last week.

“Reddit got me 33,000 views, but I’m just starting out,” said the 28-year-old Brooklynite. “People have started commenting and sending me fan mail.”

“Hopefully, SPX next year will be a little different.”